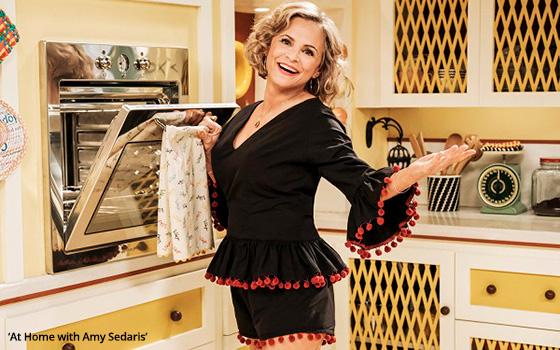 Many years ago, when slogging through yet another dreary season of “Saturday Night Live” and writing the usual “ ‘Saturday Night’ Dead” columns, it dawned on me that one of the show's weaknesses was its propensity for TV show spoofs.

Specifically, it was talk-show spoofs that drew my attention as I realized that every time the show's writers went to the idea well and found it dry (as happened often), they fell back on some sort of a talk-show parody.

I was reminded of this phenomenon while previewing the premiere episode of a new comedy series premiering Tuesday night on Turner-owned TruTV.

The show -- “At Home with Amy Sedaris” -- has Sedaris doing an elaborate spoof of the type of home shows seen mainly on regional PBS stations.

These shows and their hosts are a group of well-meaning local TV personalities who, through no fault of their own, are easy targets for city slicker comedians who love nothing more than to make fun of other people and the places they live.

“At Home” is not a talk-show spoof, but it reminded me of the “SNL” talk-show parodies -- and not in a good way.

In the show, Amy is seen cooking, doing crafts and inviting various guests and other craftspeople into her TV home.

The tone is intended to vaguely suggest the public-TV crafting and cooking shows of a bygone era -- think the 1950s and ’60s -- but the time period this show is spoofing is a little hard to peg, since these kinds of shows are still around in some form or another.

The time frame, if there is one, is largely irrelevant. As a matter of fact, the same word -- irrelevant -- could be applied to this show. Basically, it's a “Saturday Night Live” sketch stretched to half-hour length that intends to continue for 10 episodes in its first season.

In a way, I had the same reaction to this show that I had when I previewed another new Turner original, “Snoop Dog Presents The Joker’s Wild,” premiering tonight on TBS.

Concerning both shows, I wondered: What's the appeal here? What is it about either of these shows that is supposed to attract people to tune in and spend 30 minutes with them? I came up with no real answer for either of them.

On “At Home,” dimple-cheeked Sedaris expends quite an effort at remaining falsely upbeat for a half hour as she goes through the paces of satirizing this ancient form of TV show.

This one-note show relies on exaggeration for all of its comedy. For example, in a segment about knife-sharpening, her friend the knife-sharpener visits Amy in her kitchen. Before long, he reveals himself as a possibly homicidal maniac with a knife fetish. And so go most of the other segments in this show's premiere.

Apparently, guest stars have been lined up for future appearances on “At Home,” including Stephen Colbert and Cheri Oteri, to name two of them.

For reasons unknown, widely respected actor Paul Giamatti turns up in the series premiere this week playing a “businessman” who comes to dinner at Amy's, tells an off-color story, and basically leers at her like a troll.

It's at times like these that one wonders how these things get made. Who talked Giamatti into doing this? What does he get out of it?

Well, one answer might be that he got out of it what the rest of will get out of it, which is: Not much.

“At Home with Amy Sedaris” premieres Tuesday night (October 24) at 10:30 Eastern on TruTV.