LawMaker.io Wants To Be The Uber Of The Political Process 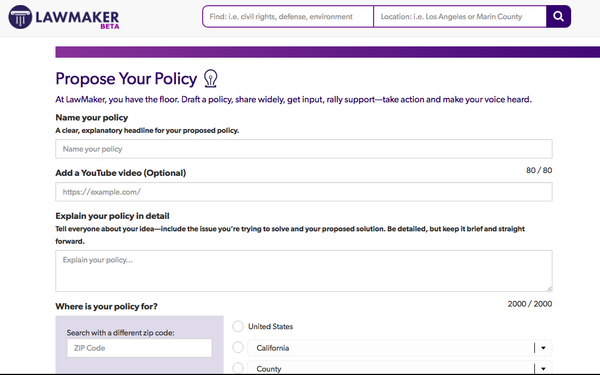 At a time when America seems transfixed by the negative role digital media platforms can play in the political process, a veteran political operative has kickstarted a project to leverage it in the other direction. The new platform, LawMaker.io, is just rolling out in beta, but its ambition, is to use digital technology to reinvigorate the political process by giving average Americans more of a voice in setting policy and proposing and influencing legislation, according to Democratic political consultant Amit Thakkar.

“LawMaker is a micro-lobbying platform,” he says, explaining, “It allows any person in the U.S. to propose ideas at the city, county, state or federal level to reach like-minded people and build a verified voter coalition to influence elected officials.”

That last part is very important, says Thakkar,  because it is the notion of building coalitions among real, identifiable voters that promises to give the platform its strength.

The timing for LawMaker couldn’t seem better, coming amid concerns about how powerful lobbies, special interest groups -- and as we’ve seen in the past year, even foreign adversaries -- have leveraged massive, unstructured digital media platforms like Facebook, Google, Twitter, etc., to swing votes and persuade public officials.

Importantly, Thakkar says LawMaker is designed to be nonpartisan. It doesn’t even ask users to identify their party affiliation. The whole point, he says, is to build consensus around ideas, issues and policies that can lead to laws that serve citizens based on common ground, not politics, per se.

LawMaker works by enabling any citizen to propose a law and then gives them the tools to help socialize it to build a coalition. Users vote proposed legislation up and down and then use all the means at their disposal -- conventional phone calls, mail and even social media -- to influence elected officials to pass it.

The platform also helps educate users about political literacy by tagging their positions and proposals, and referring them to articles and media coverage to help them learn more.

Thakkar says LawMaker is a for-profit, social good company, but he admits the revenue model is still in its early stages. Long term, he believes candidates and lobbyists will use the platform to promote their ideas to voters.

“We polled over 300 people, and 80% say they don’t believe their vote matters and they don’t believe their civil engagement between voting cycles matters, because of the way the party system works,” he says. “It doesn’t matter if they were Bernie Sanders supporter or Trump supporters. Regardless of their ideology, people said, ‘Nobody in politics is listening to us right now.’”