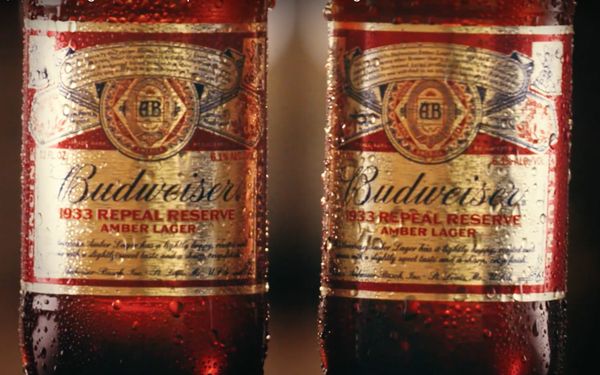 Budweiser has unveiled its latest effort to boost sales: 1933 Repeal Reserve, a limited-edition brew employing a recipe from the days of Prohibition.

The amber lager is made from an original recipe from Anheuser-Busch founder Adolphus Busch, which was distributed only in the St. Louis area, because its production was halted in 1920 by Prohibition’s arrival, according to A-B InBev.

1933 Repeal Reserve has a “light, hoppy aroma,” a “caramel-malt taste,” and 6.1% alcohol by volume, versus traditional Bud’s 5%, reports the company. It’s being sold in vintage-style, “stubby” bottles for about $8.99 per six-pack, with distribution in all of the same retail outlets as Budweiser. It will also be served in some bars and restaurants.

The last new brew launched under the Budweiser name, in January 2013, was Budweiser Black Crown, reports Just-Drinks.com. That beer, which also had a 6% ABV, reportedly was discontinued within four years.

Budweiser’s marketing for Repeal Reserve, synched to the holidays and the December 5, 1933, repeal of Prohibition, is kicking off with a promotional extension of its two-year Give a Damn Safe Rides partnership with Lyft.

On Oct. 25, between 3 pm and 7 pm ET, consumers 21 and older in New York City can enter their phone numbers in a dedicated site for a chance to score, on a first-come first-served basis, a 15-minute ride in one of several vintage 1930’s cars being operated by Lyft in the city during the week of Repeal Reserve’s launch. Passengers will be educated about the new beer as they’re taken on a tour of key Prohibition-era landmarks.

The campaign also includes a new television ad from VaynerMedia (below), social media, digital content, and appearances by Budweiser’s Clydesdales.

In addition, consumers who use the code word “Prohibition” can get $5 off on their first order of 1933 Repeal Reserve on Drizly.