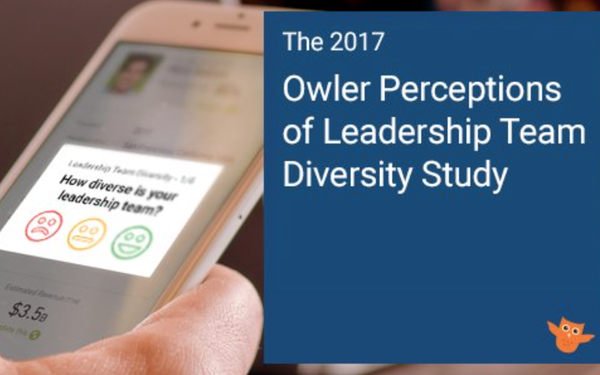 The retail industry is perceived to have the most diverse corporate leaders while the real estate and construction industries are considered to be the least diverse, according to a report.

Owler’s 2017 Perceptions of Leadership Team Diversity study focuses on how the public perceives corporate leaders. The data is segmented by region and industry across the public and private sector.

The study examines how companies perceive corporate leadership team diversity. Companies can promote how diverse they are, but perception doesn’t always match up with reality, according to the research.

Diverse corporate leaders are perceived to be based in the East South Central Division of the United States -- Alabama, Mississippi, Kentucky and Tennessee -- while the Northeast is considered to be the least diverse.

Snap-on, Autozone, Mary Kay, New York Life Insurance, and MillerCoors all came in near the top of this year's ranking. However, all of these companies are run by white men. Although Mary Kay has more diversity toward the top of its organization, it has had a white, male CEO for more than a decade.

“Diversity is seeking out the best and brightest people regardless of their looks, religion, or sexual orientation, and welcoming them to your company,” Jim Fowler, CEO and founder of Owler, tells Marketing Daily. “That’s a scenario where I find perception and reality are really far off.”

Uber is another interesting example. Positioning Bozoma Saint John, an African-American female as its chief brand officer seems to be a move to change perceptions around the company's culture and, more importantly, its leadership, Fowler says.

“It hasn't had the desired effect yet,” Fowler says. “But, over time, we could see the public come to associate Uber with diversity because Bozoma has become one of the faces of the organization. The truth, at least for now, is that Uber, like many companies on our list, is run by white men, aside from Bozoma, of course.”

This is Owler’s first time producing the study, which is a follow-up to its National CEO Likeability Study. Diversity is a topic that many people care about, including our business community of 1.5 million active members, Fowler says. The company plans to produce it annually.

“There are many injustices in this world, but I’m an optimist about the direction we’re headed in,” Fowler says. “Companies care about diversity not just because it’s politically correct, but because they’ve learned that diversity spurs innovation and creativity; it’s the engine that drives companies forward.”

Owler, who comes from the tech industry, notes that it gets a considerable amount of bad press when it comes to diversity (or more accurately, lack thereof).

“Yet, I think nothing could be further from the truth,” he says. “I’ve never worked for an industry that’s trying harder to hire for diversity. Despite the bad press, Silicon Valley is the most egalitarian place that I’ve ever worked. Hiring decisions aren’t made on race, gender, religion, or sexual preferences. That’s why the brightest, most motivated people flock here. Silicon Valley welcomes diversity -- it’s what creates innovation and creativity, which is the engine of growth.”