Naughty? Not Even An Option, Says Toys R Us Campaign 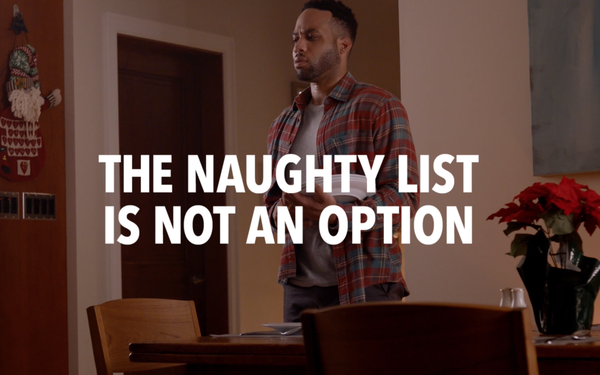 As Toys R Us continues to tiptoe through the complex territory of its recent bankruptcy, it’s launching new holiday ads showing just how far kids will go to avoid Santa’s naughty list.

The new ads, scheduled to break next week, are themed “The Naughty List Is Not An Option,” and some 20 different spots show such Santa-obsessed scenarios as kids fighting with each other over whose turn it is to take out the trash, trying to pick up the dinner check with Monopoly money and fanning a sweaty mom on her exercise bike to make sure they get the “Nice” ranking they deserve.

A spokesman for the Wayne, N.J.-based retailer says the ads are from BBDO (both Atlanta and New York) and scheduled to run on all major network and cable stations. The campaign also includes #NiceFail, a social media effort for parents to report Kringle-pleasing moments gone awry, like decorating the tree with toilet paper or setting out the milk and cookies three weeks too soon.

And it’s planning to run a retro “Elf Emergency” game on its website, where kids collect presents (and avoid coal.)

The retailer is also teaming up with the Christmas Spectacular Starring the Radio City Rockettes, withToys R Us taking over Radio City Music Hall’s 6th Avenue Store, providing what it calls “an out-of-the-box experiential shop.” And for parents attending the Christmas show, Babies R Us is planning a free stroller check.

While the fourth-quarter is critical for all retailers, it’s taken on do-or-die dimensions for Toys R Us, which filed for bankruptcy protection in September. The news has sent shock waves through the industry: Toy marketers Mattel and Hasbro, for example, sell about 11% and 9% of all their products, respectively, through Toys R Us. The retailer, which owes creditors some $5 billion and has won court approval for its debtor-in-possession financing, recently told CNBC that vendors have resumed shipping to the chain and that shelves will be fully stocked for the holiday season.

Toys R Us makes about 40% of its sales in the fourth quarter.