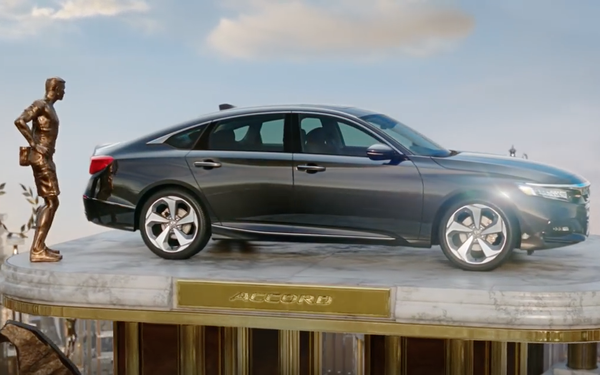 Honda is launching a campaign for its all-new Accord that plays up the automaker’s mission to push beyond past success in pursuit of even greater achievements.

A spot from RPA titled “Trophy City” introduces the all-new 10th generation 2018 Honda Accord, which it says has been the best-selling car for more than 41 years. The creative recognizes those who push their limits.

Metal trophy figures representing human accomplishments in sports, academics, music, science and other endeavors come to life to recognize and encourage those who push the limits and refuse to rest on their laurels.

“This campaign was created to recognize all that the Honda Accord has achieved as well as inspire everyone to keep reaching higher, to never rest on your laurels,” said Susie Rossick, assistant vice president, Honda marketing in a release.

The spot breaks this week during televised NFL and NHL games. The creative concept will surround trophy-winning moments across entertainment and sports. Broadcast highlights will include the Golden Globes and Latin Grammy Awards, along with a presence in both regular and post-season games across NFL, NCAA Football, NBA, and the NHL.