Study: No Bias In News Outlets' Images Of Trump 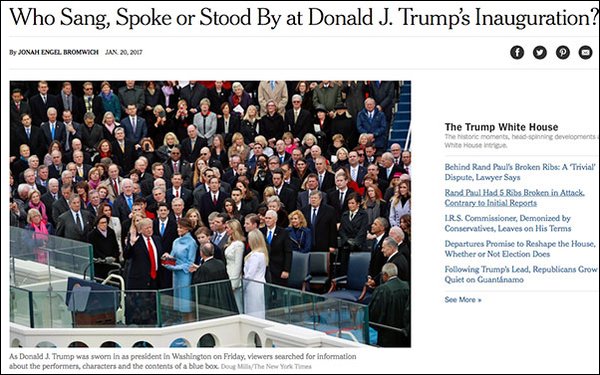 A new study used artificial intelligence technology to analyze the images of President Trump in over 5,000 news articles, and found no systematic bias in the way he is portrayed by left- and right-leaning media outlets.

“President Trump often says the media are biased against him, but that’s not true when it comes to the imagery used to portray him,” said Anastasia Leng, CEO of Picasso Labs, a New York-based company which conducted the study.

The media outlets were chosen based on a Pew Research Center study of political polarization and media habits of the American news audience, which categorized each outlet as liberal, conservative or moderate.

“Each media organization is not using imagery to influence the perception of Donald Trump,” Leng told Publishers Daily. “While the media may have its own point of view, a lot of media organizations do subscribe to an oath of accurate and fair journalism."

The team at Picasso Labs hypothesized that liberal media would use images of President Trump alone or angry, to show he is lacking support, while conservative media would show him happy, and surrounded by crowds of people, “emphasizing his mass appeal.”

They compared images of Trump angry, happy, with crowds, alone, with family, without family, with soldiers and flags, and at the oval office.

The study found The New York Times had the most even image distribution of all the outlets analyzed. The publication had the most variety of images of President Trump. Trump alone and rump with the American flag were the photos used the most, by a wide margin.

Interestingly, both liberal and moderate media used imagery of President Trump surrounded by crowds with much greater frequency than the conservative media.

Almost half of all images studied by Picasso Labs from the 5,000 media outlets showed Mr. Trump angry. Liberal media outlets had the lowest percentage (44.41%) of angry Trump images.

Liberal media outlets published the highest percentage of happy Trump images (23.22% compared to 20.21% for conservative and 20.08% for moderate).

“This surprised us because we assumed conservative media would be more likely to us imagery of Trump’s family to show strong, healthy family ties,” said Leng.

The liberal news outlets in the study featured Trump with service men and women more frequently than conservative media as well.

Leng, who worked on Google ad tech products before launching Picasso Labs in 2015, said the study shows the images of Trump “were not used to sway or manipulate the public’s opinion.”

Leng said the idea for the study came from conversations among her team about fake news and media bias, and whether it was being reflected in the images news outlets chose to use.

She said that while there was “a ton” of research on text bias, they found a lack of studies on images publications were using to portray the president.

Picasso Labs is considering using its technology to study imagery bias for Hillary Clinton, to compare news outlets' portrayal of her leading up to the 2016 election, Leng added.