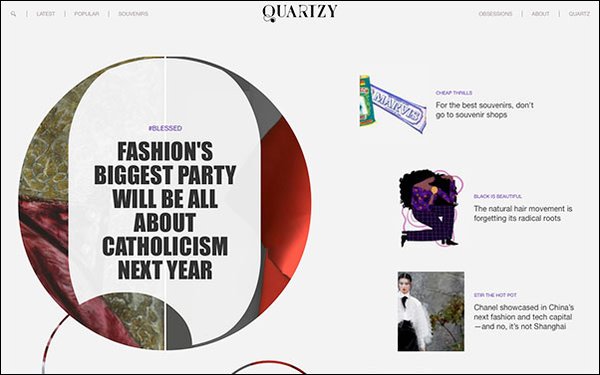 Quartz has debuted a lifestyle and culture standalone site called Quartzy, inspired by its popular newsletter of the same name.

Described as a “guide to living in the new global economy,” Quartzy's approach to lifestyle “is about more than just how we spend our money; it’s about how we spend our time, energy and attention,” Indrani Sen, Quartz’s culture editor, and Jenni Avins, global lifestyle correspondent, wrote in a post introducing the new brand.

The Quartzy site “is an outgrowth of the lifestyle and culture reporting on the site, but the success of Jenni's newsletter helped inspire the project — that's why we're naming it after the newsletter,” Sen told Publishers Daily.

The look and feel of Quartzy remind audiences of a luxury print magazine, with the flexibility of the mobile native design created by Quartz. Quartzy’s launch also incorporates a new ad unit at Quartz, called Spotlight, a full-screen ad that mimics the luxe advertising in a print magazine, according to the company.

Joy Robins, SVP of global revenue and strategy at Quartz, said the launch of Quartzy is a chance “to open us to a broader audience and open us to new categories.”

“There is a substantial amount of luxury-goods advertising money sitting out on digital because there are very few safe harbors for them to put those dollars. Either sites don't reach the right target or their design environments are atrocious or their ad practices are atrocious or all 3!,” she said.

Robins said Quartzy will aim to be “like a perfectly curated museum or the welcoming home of a host who loves to entertain.”

Citing an eMarketer study on 2018 global luxury ad spending, she said U.S. luxury advertising is spent in “greater proportions” on print and TV compared to digital. The site will be edited by Sen, who also edits the Quartzy newsletter, as well as new global lifestyle editor David Kaufman.

The company has expanded its reporting staff to create a dedicated editorial team for the brand, hiring Annaliese Griffin to report on food, Rosie Spinks on travel and Noël Duan on fashion and beauty.

Launch stories range from essays on the history of luxury and the natural hair movement, to tips from designer Dries Van Noten on maintaining long-term creativity.

In October, Quartz launched another standalone brand, called Quartz at Work, to cover management, leadership, careers and the workplace.