After Reports Of Comments Suppression,TripAdvisor Adds Warnings Of Potential Offenses 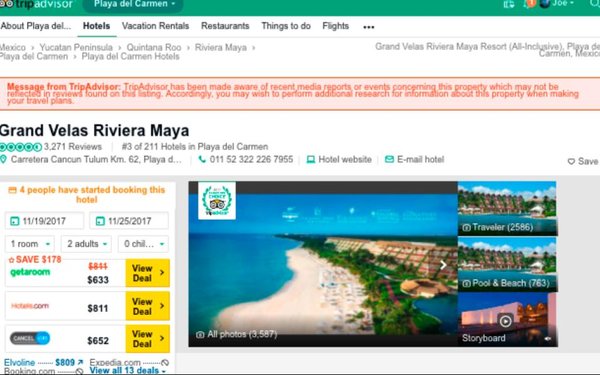 Following a series of reports that the travel rating and recommendation platform censored comments by users reporting allegations of rape and other offenses at hotels and resorts listed on the site, TripAdvisor.com has added an explicit badge warning users about potential concerns reported in the media.

“In order to better inform consumers and provide them with even more information about their travels, we are creating a ‘badge’ notification to apply to businesses to alert consumers of health & safety or discrimination issues at that business reported on within the media or other credible sources of information. Development of the badge is complete. We’re currently going through additional quality assurance testing, and expect it to be launched before the end of the year,” CEO Steve Kaufer wrote in several social media postings last week.

The badge, which has already begun appearing on some listings, reads: “Message from TripAdvisor: TripAdvisor has been made aware of recent media reports or events concerning this property which may not be reflected in reviews found on this listing. Accordingly, you may wish to perform additional research for information about this property when making your travel plans.”

The company says the badges, assigned based on a determination by an employee committee. are not intended to be an indictment as much as a warning for users to investigate the listing further before making travel decisions or bookings.