The Lessons In Keurig's 'No Win' Situation 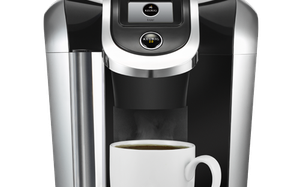 If there is any lesson to be gleaned from the controversy that overtook Keurig over the weekend and Monday, it’s that a potential backlash might be waiting around the corner at any time. And in today’s politically charged climate, it’s likely to move swiftly.

“[Keurig is] in a no-win situation,” says Eric Schiffer, chairman of Reputation Management Consultants. “These are decisions that can have thermonuclear implications for a brand, but you have to think [them] through completely.”

After an interview in which Sean Hannity was criticized for being too soft on polarizing Republican senatorial candidate Roy Moore (who has been accused of inappropriate sexual conduct with underage girls), Keurig announced via Twitter that it was halting advertising on the Fox News program. The coffeemaker brand found itself in the middle of a backlash to #BoycottKeurig. Although other companies also pulled ads from Hannity’s show, it was Keurig that found itself at the center of a boycott campaign that surprised marketing experts in its swiftness and its passion.

As conservative-leaning viewers sent videos of themselves destroying coffeemakers via social media, the story spread like wildfire, eventually prompting the company’s CEO Bob Gamgort to offer an apology to employees for giving the appearance of “‘taking sides’ in an emotionally charged debate … which was not our intent,” according to The Washington Post.

"In most situations such as this one, we would 'pause' our advertising on that particular program and reevaluate our go-forward strategy at a later date," according to the memo reprinted by the paper. "That represents a prudent 'business as usual' decision for us, as the protection of our brand is our foremost concern." (Keurig did not respond to inquiries from Marketing Daily.)

In these politically divisive times, however, "business as usual" is a new paradigm, in which power truly has shifted to the consumer. “Consumers are smarter than ever before, because they know they can affect brands [through action],” Schiller tells Marketing Daily. “[Social media] has escalated the speed, intensity and crowd-size of protest more than ever before.”

And the speed in which these protests can develop means brands need to be at the ready constantly. “We used to live in a world in which [response time] could wait until the next print publication,” says Michael Priem, founder and CEO of Modern Impact. “The one we live in now is one of constant conversation.”

Keurig is not the first brand to find itself caught up in political unpleasantness. Both Tic Tac and the Tiki torch brand have found themselves in the political crosshairs in the past year. Even the National Football League has become a place where sponsorship has become political. If divisions remain where they are or continue to widen, marketers will have to consider another factor when placing advertising.

“Brands have to be extra careful where they decide to spend their advertising dollars, and it’s even more of a challenge when we move toward people-based advertising,” Priem says. Programmatic and over-the-top advertising may not account for political content in their algorithms, leading to placements with unintended consequences, he says. “The challenge is how politically do they want their brands associated with content in our very politicized media world.”

Indeed, it’s likely marketers will have to be more careful planning ahead, Schiffer says. “What’s coming for brands will be to have an in-house political advisor or political consultants,” he says. “Politics is going to be an important analysis that CMOs need to incorporate into their thinking. You’re going to have to think through these things before they come up.”

3-d, itv, tv
3 comments about "The Lessons In Keurig's 'No Win' Situation".
Check to receive email when comments are posted.
Read more comments >
Next story loading