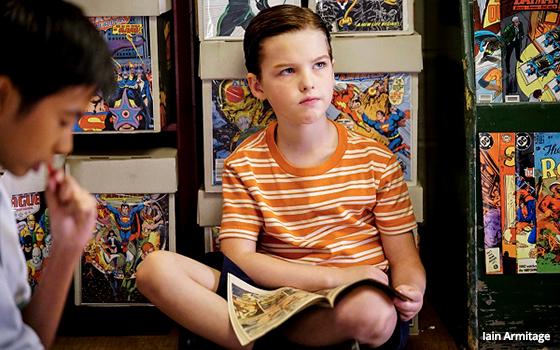 One thing I’ve always wondered about in-show product placements and mentions: If the brand being integrated into the show is the source of some sort of stress or threat in a show’s storyline, does the advertiser gets its money back?

The question arose during Thursday night’s episode of “Young Sheldon” on CBS when the show opened with 9-year-old Sheldon Cooper -- the odd little boy who will grow up to be played by Jim Parsons on “The Big Bang Theory” -- choking on a breakfast sausage and almost dying.

So let me get this straight: The Jimmy Dean brand got integrated into “Young Sheldon,” but not for its better qualities such as its pork-flavored deliciousness. Instead, the brand played a role in nearly choking a boy to death. I'm curious: How much did that cost?

Jimmy Dean was just one of several brand placements that showed up in “Young Sheldon” this week. None of the others proved threatening to young Sheldon (played by Iain Armitage, photo above) or any member of his family.

One of the product placements came in the form of a box of Count Chocula cereal during the same near-death breakfast.

While he was being held upside-down by his father in an effort to dislodge that nearly lethal piece of Jimmy Dean sausage, the precocious Sheldon spied the Count Chocula box and wondered how the count had come to earn his noble title.

Later in the show, Sheldon’s brother and sister were seen enjoying Dairy Queen Cookie Dough Blizzards paid for by their sassy grandma played by Annie Potts with a southern accent like the one she used in “Designing Women.” Let the record show that “Young Sheldon” takes place in Texas.

Other brands in the show included Marvel’s X-Men (for a plotline in which Sheldon discovers the pleasures of Marvel comic books for the first time) and Red Vines red licorice, which Sheldon also discovered makes a fine accompaniment to reading comic books.

My interest in catching up on “Young Sheldon” this week was triggered by a ratings report from earlier in the week that showed “Young Sheldon” is the highest-rated new comedy on network television this fall.

In fact, it would be the highest-rated comedy period on network TV if not for the show that spawned it, “The Big Bang Theory.”

This particular ratings report was for last week. The “Young Sheldon” episode that aired then -- on Thursday, November 9 -- drew 12.393 million viewers and scored a 2.2 in the demo (adults 18-49). When the ratings for last night (November 16) come in today, the numbers will likely be about the same.

At one point while watching “Young Sheldon” this week, a thought leaped into my head that Sheldon has a “Little Rascals” quality to him that I cannot quite describe. Then, all of a sudden, his brother and sister were seen in the show actually watching “The Little Rascals.”

For some reason, sassy Grandma showed up to inform these two children that everyone they're watching in “The Little Rascals” is dead, including Stymie, Alfalfa and Darla, who granny Annie mentioned by name.

The previous evening, I actually saw Stymie Beard -- the grown-up version -- on an old episode of “Good Times” from the 1970s. It was the kind of coincidence that our multichannel TV universe makes possible all the time, though the significance of these things is certainly questionable.

Also questionable, at least to me: Grandma’s comments about Jews on this week's episode of “Young Sheldon.” Apparently, Granny is single and recently met a man who asked her out. He happens to be Jewish or, as she insisted on putting it: “Hebrew.”

She then went on to say that he is a divorcee, but then explained that divorce is “not a big deal with those people. If they're not a lawyer, they're related to one!” Wait, what?

She said something similar a few moments later as she and Sheldon’s parents discussed taking the boy to a psychotherapist. Said she: “If you’re looking for a psychiatrist, I’ll bet my new fella’s related to one!” Come again?

I wonder what “Young Sheldon” has in store for Hanukkah next month.