Tesla Surprises With A Roadster At Semi Event 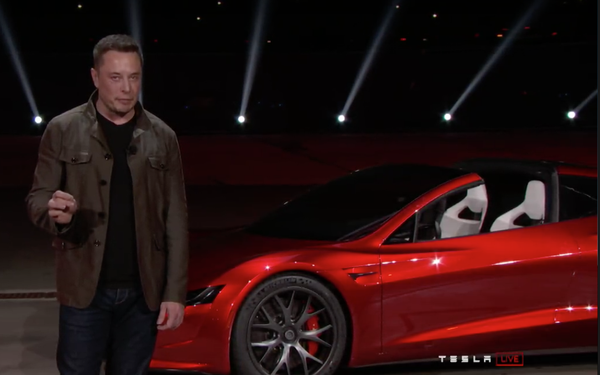 Just when Tesla CEO Elon Musk seemed to be winding down the event unveiling the company’s new Semi truck, out of nowhere a red blur rocketed onto the stage.

“People have asked us for a long time, ‘when are you going to make a new roadster?’” Musk says. “We are making it now.”

The roadster is a new version of the company’s original sports car. Musk says when it debuts in 2020 it will be the fastest production car ever made. The prototype goes from 0 to 60 mph in 1.9 seconds and 0 to 100 mph in 4.2 seconds. It can handle a quarter mile in 8.9 seconds and its top speed is above 250 mph. Musk said the production model could be faster.

The four-seater has a 200 kWh battery pack that offers 630 miles of highway driving range. Musk described it as a “smackdown” to the fossil fuel-addicted auto industry.

"The debuts of the Tesla Semi and the surprise new roadster exemplify everything Tesla does right,” says Edmunds Executive Director of Industry Analysis Jessica Caldwell. “Very few brands have the ability to emotionally connect with consumers quite like Tesla."

While Tesla doesn’t necessarily need a $200,000 halo vehicle, Musk has never been one to do things simply for practical reasons, she says.

“Tesla’s new roadster is only the latest salvo at what could end up being a hotly contested EV supercar battle in the coming years,” Caldwell says. “The major luxury automakers are getting serious about EVs, and a lot can happen between now and 2020."