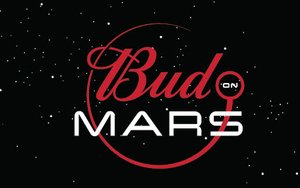 Mainstream beer brands may be struggling to woo earthlings these days, but Budweiser believes, quite literally, that the sky’s the limit.

During SXSW this past March, Budweiser, anticipating humans’ colonization of Mars, declared its commitment to creating a “microgravity” beer for consumption on the Red Planet. The brand also hosted a panel discussion on the future of space colonization, with participants including retired astronaut Clayton "Clay" Anderson and Anheuser-Busch InBev vice president of innovation Valerie Toothman.

Mere publicity stunt? Not so, insisted the brewer’s executives. “Through our relentless focus on quality and innovation, Budweiser can today be enjoyed in every corner of the world, but we now believe it is time for the King of Beers to set its sights on its next destination,” stated Budweiser vice president Ricardo Marques, at the time. “When the dream of colonizing Mars becomes a reality, Budweiser will be there to toast the next great step for mankind.”

Now, the company is taking its first tangible, public steps toward this goal. Today, Budweiser announced that it’s launching two experiments on one of its core ingredients, barley, on the International Space Station.

The experiments will be conducted in partnership with the Center for Advancement of Science in Space, which manages the U.S. National Laboratory research facility on the station, and Space Tango, which operates a commercial facility in the lab.

The experiments, on seed exposure and seed germination, will evaluate how barley reacts in a microgravity environment.

Budweiser barley seedlings will be sent to the space station on a SpaceX CRS-13 rocket, as part of SpaceX’s 13th commercial cargo resupply mission, launching on Dec. 4 from Cape Canaveral, Fla.

In addition to insights about developing a microgravity beer, the research may provide information helpful to barley production and the larger agricultural community right here on earth, according to A-B InBev.