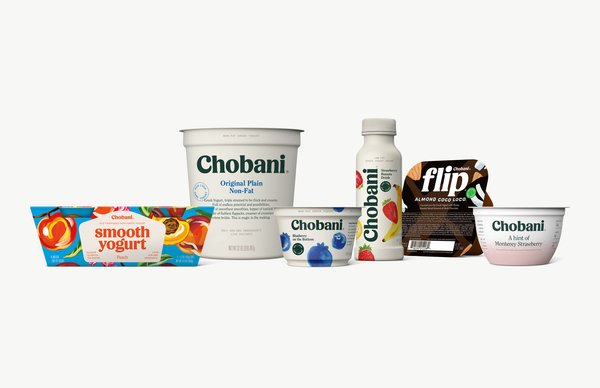 Having conquered the yogurt market in its first decade, is Chobani now planning to expand into new categories?

It hasn’t said so. But it seems to be teasing that prospect, in part through wording alluding to its anticipation of “another decade of growth in yogurt and beyond” (our italics) in its latest press release.

But first, Chobani is making the most of a full redesign of its packaging and logo.

After a year of work by its in-house creative team, the old, all-caps, block-style brand logo has been replaced by a bolder, upper-and-lower case font, and the on-package photographic images of fruit and other ingredients have been replaced by illustrations inspired by 19th Century American folk art.

The brand is also introducing a new, quintessentially idealistic brand statement: “Fighting for Happily Ever After.”

All of which, it says, are part of an expanded “wellness” mission as the company marks its 10th anniversary.

“We spent the past 10 years focusing on the impact our company can and does have on communities across America, using food as a force for good,” said Peter McGuinness, Chobani’s chief marketing and commercial officer. “That's framing how we're looking at the next decade, and our new packaging is the first glimpse into that. It's a beautiful translation of our brand and our purpose that moves us closer to becoming a food-focused wellness company."

Imitation may be the sincerest form of flattery, but after turning Greek yogurt into a mainstream phenomenon, and inspiring a raft of competing Greek lines from both leading yogurt companies and new (or new to the U.S.) brands, Chobani recognizes the need to differentiate itself again to keep growing.

With $2 billion in total sales, Chobani now leads the total Greek and non-Greek spoonable U.S. yogurt category, with about a 20% share (versus Yoplait’s approximately 19%), and dominates the Greek segment, with a 40% share. It saw double-digit topline growth both last year and this year.

However, the so-hot-for-so-long yogurt category has become saturated, and has been seeing its growth slow for more than two years now. Last year, overall U.S. yogurt sales declined 0.3%, according to Nielsen — although Chobani points out that, if “low-performing brands” are removed from the equation, the latest, 13-week data from Nielsen show 3.1% growth for the Greek category.

Chobani has maintained momentum through frequent introductions of innovative products, like its successful Flip yogurt snack line. This year, it also verged into non-Greek for the first time, with its Smooth line.

And looking for ways to expand Americans’ consumption of yogurt throughout the day and evening, as well as describing its mission as contributing to the greater good through good nutrition, are nothing new for the company. “People are hungry for better food options throughout the day, and we’ll continue to fuel our growth with products that fill gaps in the market and meet consumer needs," McGuinness told Marketing Daily in early 2015.

However, Chobani is now declaring that it has specific strategies “to make universal wellness happen sooner.” These, it says, include scaling up its nutritional wellness efforts to “provide better food for more people”; increasing social wellness through its “investments in the communities it serves” and the people who make its food; and building a more sustainable supply chain.

Chobani reports that its latest brand “evolution” will be supported by new advertising creative to launch next year, including online video, shopper marketing, social media and PR programs. (One of the two short videos it released in conjunction with its redesign news is embedded below.)

In addition, Chobani says it will celebrate its 10th anniversary in February with activations for fans and initiatives focused on “strengthening communities.”

The redesign — which also spans its website, cafés and other assets — and expanded mission declaration have been paired with a simultaneous announcement that Chobani is for the first time introducing a new product line starting on a regional basis.

Its new A Hint Of line consists of blended Greek yogurts that feature naturally lower sugar content (9 grams), high protein (12 grams) and a “hint” of fruit and spices. It will be available starting in early December in Pacific, Northeast and Florida markets, before expanding nationally in July 2018.