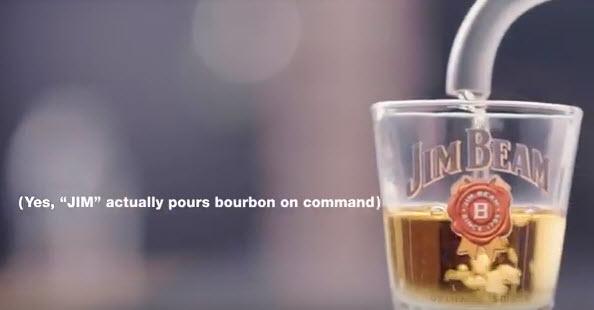 For bourbon lovers, at least, a new voice-activated device being sold by Jim Beam offers a distinct advantage over run-of-the-mill smart home assistants like Echo and Google Home.

The bourbon brand’s JIM device, billed as the world’s first smart decanter, can actually decant a shot of liquor (from a built-in storage compartment) on voice command, as demonstrated in the video below.

The device is available for pre-order for $34.99, in limited quantity (and just one per customer), from Jim Beam’s online store, and the brand promises delivery by Dec. 15.

JIM also answers questions, with the responses voiced by Fred Noe, Jim Beam’s seventh-generation master distiller. Asked about the weather, for instance, Noe’s voice replies: “I have no idea, but I do know it’s the perfect weather to enjoy bourbon.”

The hitch: JIM’s 3G capabilities will expire after about six months. But buyers will still have a functioning, high tech-looking branded Jim Beam decanter.

This isn’t the brand’s first foray into tech designed to keep its bourbon top-of-mind. In fall 2016, it offered the Jim Beam Apple Watch, which couldn’t really do much (even tell time), but offered a built-in, collapsible shot glass. Jim Beam dubbed it “the first drinkable wearable.”