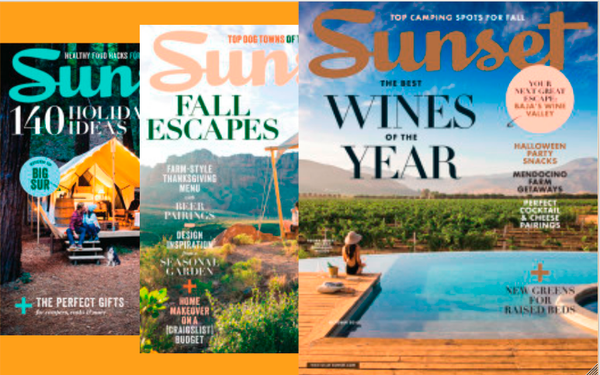 After a tumultuous few weeks culminating with the sale of Time Inc. to the Meredith Corporation late Sunday night, Time Inc. has sold Sunset, of one of its acclaimed regional magazines.

Sunset had been with Time, Inc. for 27 years at the time of the sale. The publisher was its third owner in nearly 120 years of existence. The publication boasts a readership of 6.5 million over all platforms.

Purchased by California private equity firm Regent, the Sunset brand, which encompasses a monthly print publication, digital and social platforms, books and events, was founded in 1898.

Literary giants like Jack London and Sinclair Lewis found a home there, and the magazine is also affiliated with the modern environmental movement and Sierra Club, which it is credited for offering a supportive arena to early on.

Known for its coverage of the lifestyle of the modern American West, Sunset’s editorial extends from food and wine to travel, home and gardening. The brand’s Celebration Weekend, which began in 1998, has hosted hundreds of thousands of visitors drawn to its lineup of celebrity chefs, wine seminars and garden tours.

The brand will continue to expand with the launch the Sunset Idea House program in February 2018 at the Modernism Week design festival in Palm Springs.

Michael Reinstein, Chairman, Regent L.P., stated: “We are excited to partner with Sunset’s talented Editor-in-Chief Irene Edwards and her accomplished team to ensure that Sunset continues to thrive for generations to come.”

Prior to its acquisition by Meredith, Time Inc announced in August that it was exploring the sale of three of its titles, Coastal Living, Sunset and Golf.