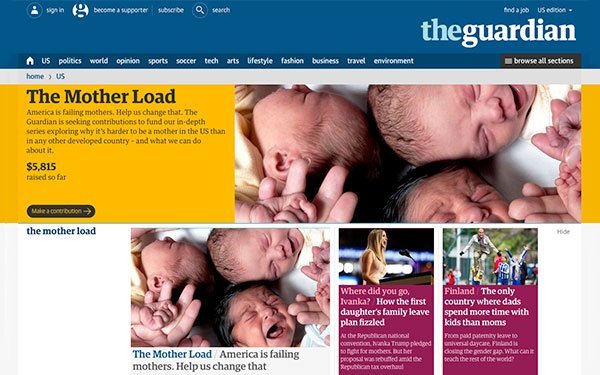 Guardian US is crowdfunding a new editorial series on the challenges of motherhood in America, marking the third reader-funded project the media company has launched in 2017.

Globally, The Guardian now receives more revenue from readers than from advertisers. Those contributions also make up a “significant” portion of Guardian US’ revenue. Over 800,000 readers have supported the organization over the last twelve months.

Called “The Mother Load,” the new, four-month series aims to shine a light on how motherhood in the U.S. is more challenging than in other developed countries, with advice and proposed solutions on how to improve the situation.

The U.S .is the only country in the developed world without mandatory maternity leave. It endures the high cost of childcare and the worst maternal death rate, compared to other developed countries, according to the publisher.

Guardian US is asking readers to help fund the project. The other social justice-focused projects from the publisher this year include “This Land is Your Land,” which focuses on the growing threat to America’s public lands, and “Break the Cycle,” a project exploring solutions to America’s gun violence crisis.

“We’re asking Guardian readers to help us dial up the pressure on politicians and corporate leaders by supporting our coverage and helping us drive a conversation,” Jane Spencer, deputy editor of Guardian US, stated regarding the newest project.

Guardian US will allocate up to $100,000 of funds raised toward editing, reporting, visuals and new commissions on its coverage of parenthood in the States. If the campaign raises more than $100,000, additional funds will be used to support the Guardian’s core operations to cover national news and social issues, including women's rights and the struggles of families.

“The Mother Load” launches today with four stories, ranging from Ivanka Trump’s plan to help mothers to a comic on maternity leave to  how dads in Finland spend more time with kids than moms.

Guardian US is the US digital edition of UK-based The Guardian, owned by Guardian News & Media.