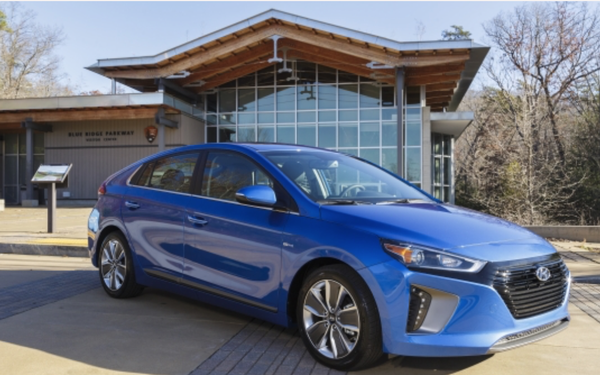 Hyundai Ioniqs will be used at three national parks, thanks to a donation by the automaker.

The automaker says the gift is a continuation of its commitment to global sustainability and the support of America’s national parks.

Two 2018 Hyundai Ioniq Hybrids were given to each park — Blue Ridge Parkway in Virginia and North Carolina, Santa Monica Mountains National Recreation Area in California, and National Capital Parks (East) in Washington, D.C. The vehicles were delivered to the parks during the past week and will be put into use immediately.

“Hyundai’s brand promise of ‘better’ aligns perfectly with what the national parks do to preserve and maintain the country’s most historic and treasured places,” said Dean Evans, CMO, Hyundai Motor America, in a release.

In the very large parks with widespread facilities and visitor services areas, these vehicles will improve the ability of park staff to care for these iconic places, says Reginald Chapple, division chief, partnerships and philanthropy, National Park Service.

The donation also supports the park system’s effort to convert its fleet to fuel-efficient vehicles to increase sustainability and reduce costs.

Hyundai claims the Ioniq Hybrid is the most fuel-efficient car in America, with an EPA-estimated 58 combined MPG. The Ioniq is the first eco-focused vehicle in the world to offer three distinct electrified powertrains on a single, dedicated vehicle platform — the Ioniq Hybrid, Plug-in Hybrid and Electric models.