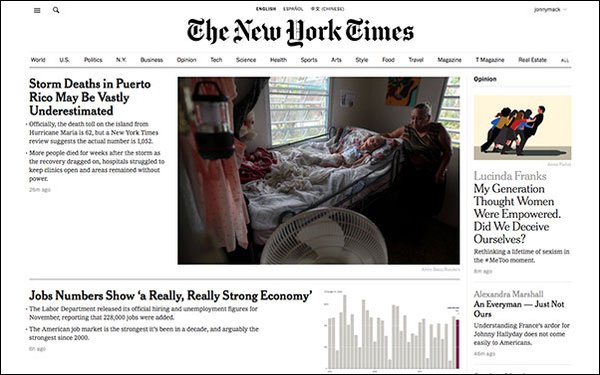 The New York Times is adding three positions to develop its audience strategy to “ensure our audience is at the core of our work” going into 2018. That's per a memo from the NYT’s executive editor Dean Baquet, managing editor Joe Kahn, editorial page editor James Bennet and deputy managing editor Cliff Levy.

The NYT has 2.5 million digital subscriptions, 1 million print subscriptions and more than 130 million monthly readers, according to its third-quarter earnings. That is double the audience the newspaper had two years ago.

But the top editors at the NYT say they “have more work to do if we’re going realize our ambitions of reaching still more people with Times journalism and adding millions of subscribers in the years ahead."

In October 2015, the publication said it was aiming to double digital revenue to $800 million by 2020 (from $400 million in 2014). It emphasized the need to increase subscriptions and engage with loyal readers.

In the memo released today, the NYT editors declared 2018 “the year of audience.” They said the company would work on “developing an even clearer view of who we’re going after, how we can best compete for their time and attention..." The larger goal is to demonstrate to readers that "Times journalism is so valuable it’s worth paying for.”

The newsroom audience director will develop a strategy to understand the newspaper's audience and advise on coverage and distribution. The off-platform editor will oversee programming and distribution across channels like Facebook and Twitter. The on-platform editor will be tasked with programming across desktop and mobile home screens, push notifications and recirculation.

Once hired, the director and editors will work with existing newsroom teams like Digital Transition, which is responsible for working with news desks “to translate audience strategies into coverage approaches and best practices for reporters and editors,” according to the memo. The will also assist the Analytics, Research and Newsroom Strategy team.

All will also work closely with Rebecca Grossman-Cohen, the company’s vice president for audience and platforms.