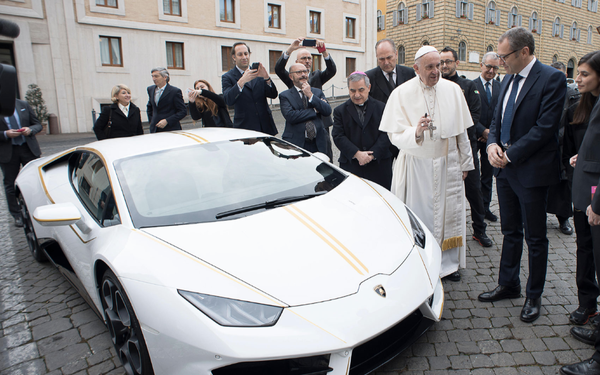 Most recently, the brand announced a four-year partnership with Bodyfriend, an upscale massage chair company.

The licensing deal gives Bodyfriend exclusive rights over Lamborghini’s branding on massage chairs. As a result of the agreement, the first Lamborghini massage chair is expected to be launched by the end of spring 2018.

The design and smart functionalities of the new line of Lamborghini-inspired products will enable Bodyfriend to accelerate its mission to educate potential customers about the perks and health benefits of having a massage chair at home, according to the company.

The deal is also another step towards Bodyfriend’s goals of reaching $1 billion in yearly sales by 2021. Earlier this year Bodyfriend opened two stores in Los Angeles and is planning to open an additional 140 stores throughout the U.S. in the next three years.

Earlier in the month, Automobili Lamborghini produced a special Huracán RWD that it donated to His Holiness Pope Francis. The production-version of the vehicle has a base price of $262,350. The ceremony of presentation to Pope Francis was held in the Vatican.

The car will be auctioned by RM Sotheby’s on May 12 with the proceeds delivered directly to the Holy Father, who decided to allocate them to the Pontifical Foundation “Aiuto alla Chiesa che Soffre” (Aid to the Church in Need), the Pope John XXIII Community, GICAM headed by Dr. Marco Lanzetta (hand surgeon) and “Amici per il Centrafrica” (Friends of Central Africa).

The Lamborghini Huracán RWD donated to the Pope was produced by Ad Personam, the company’s customization department. It is painted Bianco Monocerus (white) with Giallo Tiberino (yellow) stripes that run along the body in homage to the colors of the flag of Vatican City.