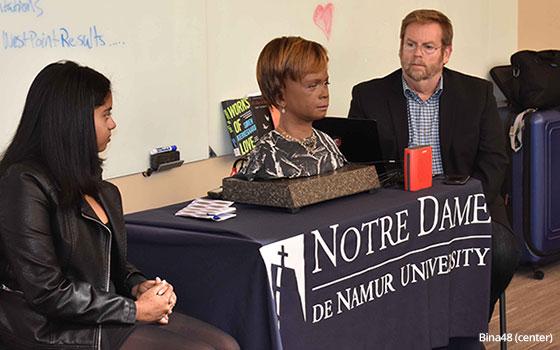 Robots are starting to get a workout, at least in some educational circles.

An AI-powered robot in China recently passed the national medical licensing exam, the first known robot to have done so.

The robot was designed to capture and analyze patient information and scored well above the required mark on its test.

Using artificial intelligence, the robot completed all the assignments for a class in the ‘philosophy of love,’ according to a statement from the school.

Bina48 also participated in class discussions via Skype and then took part in the formal exam last week.

“It was remarkable to be part of this historic first for a socially advanced robot to take a college course,” said Professor William Barry, the instructor of the class. “The other students and I learned so much about human experience and love as we tried to explain our emotions to Bina48.”

The robot also participated in a debate between Barry’s class and students in an ethics course at the U.S. Military Academy at West Point.

The issue debated over three weeks via YouTube was lethal vs non-lethal combat weapons in warfare. The students traded videos between the NDNU campus and West Point.

No word on if Bina48 will be getting any credit for the course completed.