No Taboos About It: FX Series Was Year's Best Show 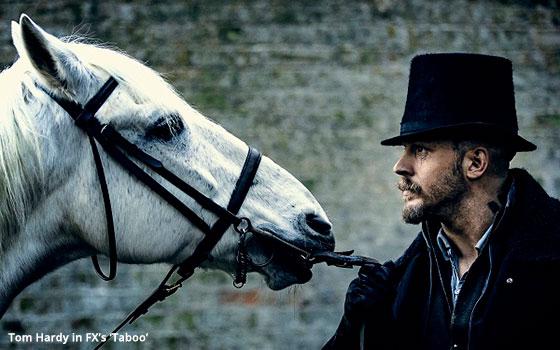 Whether you like their shows or not, you cannot accuse the folks at FX of not going out on the edge with whatever they come up with.

Which is why it should surprise no one that the TV Blog’s pick for best new show of 2017 would also be an FX series -- “Taboo” -- just a day after naming another FX series, “Fargo,” as the year’s worst.

“Taboo” premiered way back on January 7 and it held on for almost an entire year to emerge as my favorite of all the new shows I reviewed here in 2017.

This pungent series, which took place in some of the gamier sections of 1814 London, concerned itself with the arrival back in England of a mysterious figure named James Delaney and his apparent quest to reclaim a family fortune after a long absence.

Delaney was played with extraordinary commitment by Tom Hardy in a performance that still stands as the best of the year. In addition to Hardy, this show's best feature was its ability to re-create a world I had never seen before and make it real.

Elsewhere on TV, the shows that came in for the most praise here this year came in a wide range of forms and aired on a variety of networks.

The best made-for-TV movie was so engrossing that it had no real competition. It was “The Wizard of Lies,” HBO’s Bernie Madoff movie with Robert de Niro as Madoff and Michelle Pfeiffer as his wife, Ruth. Both portrayals were uncanny.

Another HBO show, “Crashing,” starring comedian Pete Holmes, was one of the best comedies of the year. So was TruTV's “I'm Sorry,” which introduced the world to a bold new comic talent, Andrea Savage.

I even liked “Downward Dog” on ABC, the sitcom about a dog whose thoughts served as narration for the show. This show was reportedly cancelled, which was a doggone shame.

My pick for best comedy of 2017, however, was “Brockmire,” the Hank Azaria comedy on IFC in which he played a washed-up sportscaster who couldn’t find work for several years in the United States because he had a drunken, profane meltdown on the air one day.

Other standout shows this year included some unlikely candidates. One of them was “Sun Records,” a drama with music about the early days of rock ’n’ roll in Memphis. Watching this show was one of the year's happier experiences.

Another show I would not have predicted would be reviewed favorably here was “Midnight, Texas” on NBC -- a summer drama about an eerie Texas town. For reasons that are still difficult to explain, this show worked for me, even though so many other shows of its type over the years located in other eerie TV towns did not.

Call me an old softie, but I also liked Fox's new “Love Connection” introduced last summer. Host Andy Cohen applied just the right touch to this one, and he was one of the key reasons why it worked so well.

In the realm of non-fiction content on TV this year, I was fascinated by “The Putin Interviews,” Oliver Stone's multipart interview series with the Russian leader that was seen on Showtime.

This show was so revealing that it made me realize that our news media here in the United States barely scratches the surface when it comes to covering other parts of the world. They’re too busy producing meaningless argument shows every night.

Two documentaries earned their way onto the year’s-best list -- “The Vietnam War” on PBS from  co-directors Ken Burns and Lynn Novick and “Brillo Box (3¢ Off)” on HBO from director Lisanne Skyler. The "Vietnam War" documentary was 18 hours long. “Brillo Box” was 40 minutes. They couldn’t have been more different, except for one thing -- they both worked perfectly.

The most memorable day in TV in 2017 was probably July 20, the day O.J. Simpson’s parole hearing in Nevada was broadcast live and a great swath of the country stopped what they were doing to watch it. This parole hearing was great television. It even had a mildly surprising ending: His parole was granted.