The Top Story In The TV Business In 2017? Take A Guess 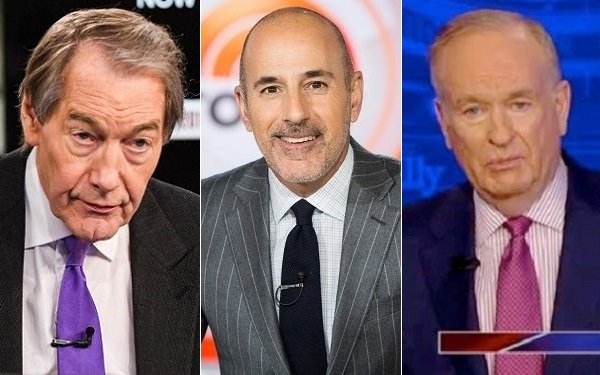 Determining the top story in the TV business this year was quite possibly the easiest assignment I've ever had. Wanna take a wild guess at it before reading on?

It is sex harassment in the TV business, of course. The continuing saga of men in high places in the TV business making inappropriate overtures (and in some cases, lunges) at women in their workplaces was a story without end in 2017.

The tsunami of stories about sex harassment in the TV business was so overwhelming that at times, the individual stories that broke every few weeks and days over the past year eventually lost their ability to shock.

It was shocking to come upon the Charlie Rose story when it broke on November 20. But just nine days later came the news about Matt Lauer. After that, all bets were off.

And these stories came near the tail end of a year in which stories like them in the TV business were never-ending. Remember Bill O’Reilly? He was once one of the top stars in the TV news business too. He was cashiered at Fox News Channel all the way back in April.

His former boss, Roger Ailes, was a sex-harassment casualty long before that -- losing his job in 2016. He died this year, though, about a month after O’Reilly was fired.

There were so many others this year in the TV business -- so many accused, so many statements of apology and regret, and so many firings and dramatic “severings” of relationships: Mario Batali, Louis C.K., Kevin Spacey, Jeffrey Tambor, former “Saturday Night Live” writer Al Franken … and the list goes on and on.

Will it continue to go on in the coming year? Probably.

The other stories that made news in the TV business in 2017 seem trite by comparison, although in any other year, they would glow with importance.

One of them was Stephen Colbert’s ascendance to the top spot in the late-night wars. Colbert’s rise in the ratings to surpass NBC’s dopey also-ran Jimmy Fallon and “The Tonight Show” was shrewdly done -- applying Colbert's skill at political satire (honed for years at Comedy Central) to skewering President Trump every night on his CBS “Late Show.”

Colbert appears to have provided CBS with a supremacy in late-night that it never really had before.

David Letterman enjoyed top-ranked status for a time after he launched the CBS “Late Show” in 1993. But Jay Leno overtook him in 1995 and kept “The Tonight Show” in the No. 1 spot, where it had traditionally resided for decades under Johnny Carson.

Colbert's reign, however, feels like it has staying power -- at least for the duration of the Trump administration.

Elsewhere in the TV business this year, big stories were few and far between. The year was barely three days old last January when NBC announced its sensational new hire -- Megyn Kelly, lured from her prime-time perch at Fox News Channel to take over an hour of “The Today Show” at 9 a.m. weekdays on NBC.

So Kelly became a network-newsperson, as opposed to a cable newsperson, and for all intents and purposes, dropped off the pop-culture radar. She is making millions, however, and working days instead of nights, so that must count for something.

It was a year of merger deals. The Discovery networks linked up with Scripps -- joining TLC and Discovery Channel with HGTV and the Food Network under one umbrella. And Home Shopping Network merged with QVC.

In the year's most surprising deal, Rupert Murdoch agreed to sell substantial assets of 21st Century Fox to Disney, leaving Murdoch and his sons with a much smaller Fox company.

Earlier in the year, the term “memo-gate” was created when Steve Harvey made news with an interoffice memo in which he begged underlings to stop waylaying him for autographs and selfies. When the memo went public, he was derided for behaving like a monarch who forbade his subjects from looking him in the eye.

The TV Blog flew to his defense, but received no thank you note -- a mini-scandal that came to be known as “thank you-note-gate.”

In general, commercial-supported TV -- particularly on basic cable -- continued to struggle. The search for real hit shows with the power to engage was largely unsuccessful.

Television didn't die, however, although the pairing of Kelly Ripa and Ryan Seacrest on ABC's “Live!” looked like it would provide the medium's final death blow.

Donald Trump continued to be the biggest topic for TV news and satire. Here at the TV Blog, our opinions on this were decidedly mixed.