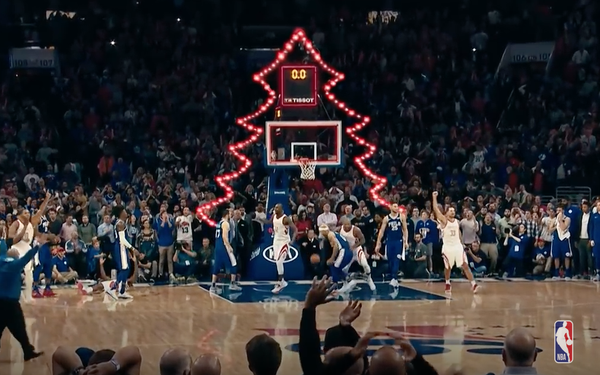 The NBA is launching a spot, “The Gift of Basketball,” that highlights unforgettable game moments and plays up the five games on Christmas Day.

Part of the league’s global “This Is Why We Play” campaign, the spot’s holiday-themed graphics and game footage are set to a classic version of “Jingle Bells” and reminds fans why these games make it feel like Christmas morning five times in one day.

The spot, from Translation LLC, broke Dec. 14 during the TNT primetime games involving the Los Angeles Lakers vs. the Cleveland Cavaliers and the Dallas Mavericks vs. the Golden State Warriors.

The NBA is also enlisting digital, social and radio creative assets that promote the Christmas Day line-up. Previous spots have used holiday-themed elements to reinforce the association between the NBA and Christmas Day.

This year’s spot is targeted to core, casual and curious fans and highlights the many reasons to watch all five matchups on Christmas Day, an NBA spokesperson tells Marketing Daily.

The five Christmas Day games are Philadelphia 76ers at New York Knicks at noon ET on ESPN, Cleveland Cavaliers at Golden State Warriors at 3 pm ET on ABC, Washington Wizards at Boston Celtics at 5:30 pm ET on ABC, Houston Rockets at Oklahoma City at 8 pm ET on ABC and Minnesota Timberwolves at Los Angeles Lakers at 10:30 pm ET on TNT.