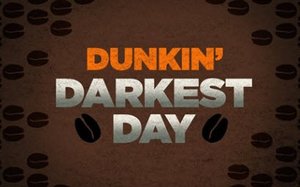 To mark the darkest day of the year — the winter solstice on Dec. 21 — Dunkin’ Donuts is brewing up some dark craft beer, as well as offering an animated Snapchat filter and Twitter and Facebook activations.

In Dunkin’ Donuts’ home state of Massachusetts, the brand partnered with Wormtown Brewery in Worcester to launch a stout-style DDarkRoasted Brew, the first beer to be brewed with Dunkin’s dark roast beans. The beer will be for sale at the brewery for just the one day, starting at 11:28 a.m. ET (the exact time of the solstice in the United States).

Dunkin’ will also offer an animated Snapchat filter—the first to be offered nationwide by Snapchat, according to the restaurant brand. The filter will let fans across the U.S. show and share their “dark sides” by adding animation to their photos and videos, says Dunkin’.

In addition, Dunkin’s Twitter page will become @DunkinDarker for the day. On Facebook, the brand will host a full-day #DunkinDarker event featuring tips, games, prizes, and a livestream presentation to “help people conquer the darkness.” Dunkin’ is encouraging fans to “RSVP” on Facebook now.