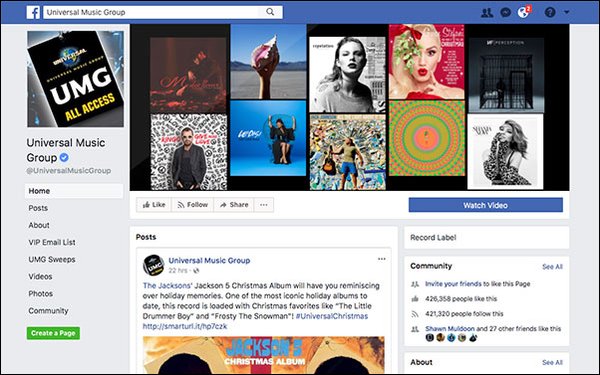 Users will also be able to create their own videos using music from Universal’s library, and to share videos featuring Universal artists across social graphs.

The companies say they plan to create a roadmap for delivering "new music-based experiences online.” Details were vague in the release, though the participation of Oculus implies that virtual reality experiences would be a part of that long-term plan.

It was not immediately clear, however, how Universal and its artists would be compensated for the use of their music.

It is possible some products could be supported by advertising. Bloomberg reported earlier this year that Facebook was “offering major record labels and music publishers hundreds of millions of dollars so the users of its social network can legally include songs in videos they upload.”

A spokesperson for Universal Music had not responded to a request for clarification, as of publishing.

Universal Music signed a new deal with Google’s YouTube platforms earlier this week  that expanded music video rights and added flexibility for artists to decide where their music appears on that platform.