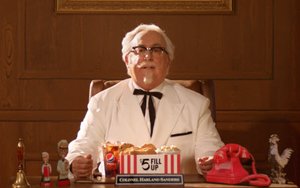 KFC is shaking up fans’ expectations by failing to feature a well-known actor or comedian playing Colonel Sanders in its latest series of commercials.

Why? Because the new spots’ mission is to promote KFC’s value offerings, including a $3.99 chicken pot pie and $5 Fill Up meals, the premise is that the brand is helping to maintain those deals by economizing on talent for the ads.

The “Value Colonel,” as he introduces himself in the spots, is played by Christopher Boyer, who has for years been playing roles like “man in mattress store” and “old, seasoned farmer” in various TV shows, according to KFC.

Boyer’s career has been so low-profile that during the auditions for the value TV ads, the creative team didn’t remember that he had also auditioned, unsuccessfully, for the role of the Colonel in 2015, KFC U.S. director of advertising George Felix said in the brand’s announcement. (KFC has posted a video with clips from the value ad auditions on YouTube.)

Despite the “no celebrities” schtick, one of the new 15-second ads (below) includes a cameo by Wayne Knight, of “Seinfeld” fame. Although KFC insisted that Knight “was too much of a celebrity to play the Value Colonel, he still decided to be on set during filming in search of free chicken,” jests the brand.

A second ad reveals that the Value Colonel is relying heavily on green screen techniques to keep costs down.

The TV ads will begin airing on Dec. 28.