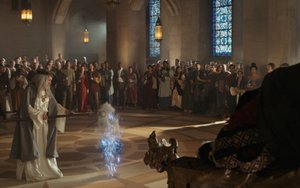 Bud Light is once again extending its medieval court, “Dilly Dilly”-themed creative — this time with a trilogy of TV spots culminating during the Super Bowl.

Like the “Game of Thrones” series that the “Dilly Dilly” campaign spoofs, the latest ads will be episodic, with the story’s conclusion revealed in the Super Bowl LII spot. according to Andy Goeler, Bud Light’s vice president of marketing.

The Anheuser-Busch brand will debut the first new ad on Christmas Day, during the Steelers and Texans NFL game, and the second ad during January’s NFC/AFC Championship games.

The new ads are the latest to leverage the “Dilly Dilly” phrase that’s generated social and earned-media gold (and slowed, although not reversed, its sales declines).

Like its predecessors, the first new ad, “Wizard” (below) humorously plays off over-the-top fantasy series. Here, the king is so pleased by a wizard’s ability to turn various objects into 12-packs of Bud Light that he brushes aside the wizard’s offers to put a curse on the king’s enemies — or make him immortal.

The brand’s last “Dilly Dilly” ad, which debuted in mid December, was designed to promote the launch of its second “Super Bowl Tickets for Life” sweepstakes.

As with previous ads in this series, the brand will support the “trilogy” TV spots with mobile-optimized digital assets, reports Andy Goeler, Bud Light’s vice president of marketing. Some will be cutdowns of the TV ads; others will be digital/social-only videos.

Additional, “unique” activations around the second and third ads will be revealed in coming weeks, he says.