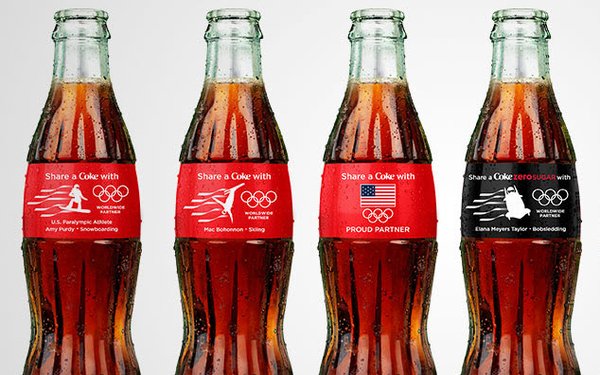 Coca-Cola has unveiled new, Olympics-themed “Share a Coke” bottles, featuring the “4-pack” of athletes who are its main brand representatives for the 2018 Winter Games in PyeongChang.

The limited-edition bottles, which are also part of Coca-Cola’s tributes to its 90-year history of supporting the Olympics, will be available starting in January.

Those athletes will also be featured in out-of-home advertising, digital content and promotions for limited-edition, Olympics-inspired Coca-Cola Freestyle machine flavors.

Leading up to the Winter Games, the company will highlight its long association with the Olympics through several special events.

At January’s Gold Meets Golden event, Coca-Cola will host a collection of Olympics memorabilia and “one-of-a-kind marketing relics,” according to the company. Gold Meets Golden is an events platform that brings together athletes and Hollywood actors and entertainers.

Coca-Cola began its Olympic involvement in 1928, when it supplied more than 1,000 boxes of its products to participating U.S. athletes at games held in Amsterdam. Since then, the company has been a sponsor of all 204 National Olympic Committees and their teams.