From Cyber Monday To Cyber Month: The Broadening Of Retail Holidays

From a digital perspective, Cyber Monday continues to maintain its momentum, while Black Friday loses some steam. But the more subtle pattern is that Internet traffic shows less intense spikes on retail holidays than in previous years; instead, traffic is becoming more evenly spread throughout the season. Cyber Monday is evolving into Cyber Week and beyond; in consumers’ minds, it increasingly feels like every day is Cyber Monday.

We’ll explore the broadening of retail holidays through the lens of the digital performance of two behemoths: Amazon and Walmart. 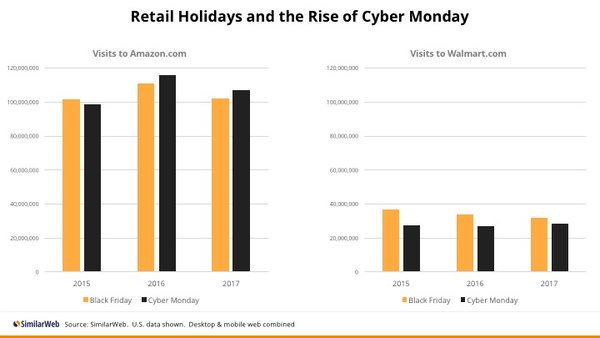 Every Day Is Becoming Cyber Monday

Amazon traffic on both retail holidays was down nearly 8% from 2016, figures that in isolation suggest a weaker holiday season this year. But in fact, if we look at the buildup and aftermath of the retail holidays, we find that broader traffic volume throughout the 2017 holiday season is almost exactly on par with last year.

Walmart shows a similar, if less dramatic, “smoothing” over time. Its 2017 Black Friday traffic was 6% lower than in 2016, but its overall traffic in the 25-day period is up 3%. 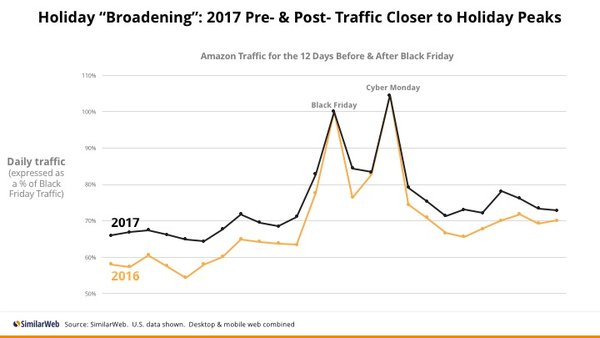 Overall, the broadening of retail holidays is a mixed bag for retailers and brands. Broadening holidays over multiple days likely brings in new buyers and more dollars, but even if it just spreads out existing demand, there’s some benefit to that as well. Remember that Black Friday got its name from being the day when retailers turned profitable for the year. And that’s a situation no business would choose — in the red 90% of the year, with end-of-year volatility that makes forecasting and inventory management very difficult. (Broadening demand throughout the year is also why Amazon put Prime Day in July).

On the other hand, Cyber Monday obviously loses some motivating power when every day feels like Cyber Monday, and the “everything’s on sale all the time” vibe undermines brands’ pricing power and consumers’ perceptions of value. Still, at least to some extent, these retail holidays “work” for brands, so expect more of them, and expect them to expand from single-day events to “mini-seasons.”