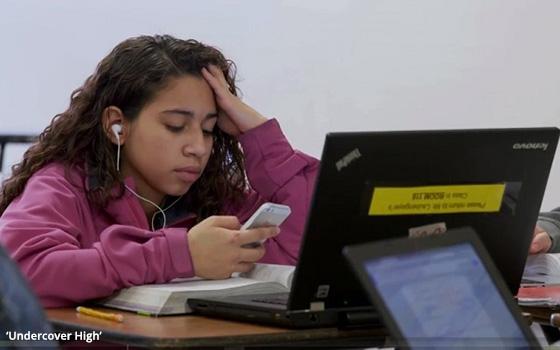 Cell phones are the bane of our existence. And I suspect no one knows this better than today’s high school teachers.

What is it about cell phones that make them so addictive -- for many grownups certainly, but for teens especially? What is it about the cell phone addiction that makes kids push back so ferociously at the suggestion that they put down their phones in order to pay attention in class (or interact with family members at dinner)?

The subject arises with the premiere this week of a new docu-series on A&E called “Undercover High,” about the day-to-life of a typical American high school. The series premiered on Tuesday night (January 9). In case you missed it, there are 10 more episodes airing at 10 p.m. Eastern on Tuesdays on A&E.

Over the course of the show, these undercover students will bear witness to the hidden social lives of high school students (with the help of TV cameras, of course). The school is Highland Park High School in Topeka, Kansas.

It's a very interesting scenario and a very good show. Although it is set in a different kind of place, the setup here is not unlike A&E's other undercover-spy show, “60 Days In,” in which a group of undercover observers volunteer to move into a local jail to report on what life is like there.

But here's why the subject of cell phones came up: In the premiere episode of “Undercover High” that I previewed the other day (with the full intention of reviewing the show in time for Tuesday night's premiere if the Golden Globes had not been so tempting a topic for the Tuesday TV Blog), out-of-control cell phone use in classrooms by students was one of the first major problems mentioned.

As in the photo above (a screen-grab from the episode), students are seen constantly staring at their cell phones, and seemingly, utterly ignoring their teachers and the learning they are supposed to be doing in their classrooms.

Teachers are seen asking students to put their phones away or gesturing at them to put them away. They even post signs in their classrooms that say “no cell phones,” but to no avail.

Although this segment was brief, it gave the impression that policing their classrooms for cell phone use is something these teachers are challenged to do almost constantly -- which in itself presents an obstacle and a distraction from their entire reason for being there, which is to teach, not babysit or act as cell phone police.

At one point, one student looks directly at one of the cameras and says: “You’re not supposed to have your phone out, but we honestly don't care.” One can assume that schools today possess very few (if any) disciplinary options for dealing with this kind of refusal to obey a simple rule such as prohibiting cell phones in class.

One of the school administrators blames social media for the cell phone outrage in the school. “We do have a lot of issues with social media,” he says matter-of-factly. The administrator, assistant principal Dan Ackerman, admits he does not understand the hold that social media has on the kids in his school.

He notes that he grew up in the era before rampant cell phone and social media use in class overtook learning in the nation's schools. I did too, and I am similarly clueless about this phenomenon.

For someone my age, it would be like bringing a portable radio to class and insisting on listening to it all day even though it would certainly be forbidden. When I went to school, though, teachers and administrators had the power to enforce rules. I am guessing they have very little such power today.

As I watched the show, I had the idea that perhaps cell phone marketers and manufacturers should be goaded into launching awareness campaigns about the dangers of cell phone addiction.

Sure enough, the very next day on the front page of my Wall Street Journal was a story in which a group of investors were urging Apple to do just that.

Cell phone use in so many areas of our lives is a scourge. It's bad enough that we have to put up with cell phone jerks on trains and in movie theaters. But in school classrooms, cell phones are especially disruptive. Maybe this “Undercover High” show can bring a new level of awareness to this problem.