NatGeo's 'Chain Of Command': TV Takes You There 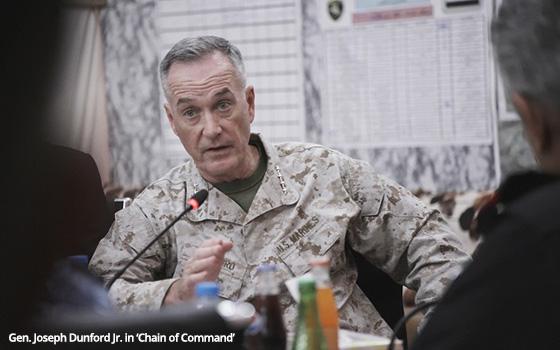 At the risk of repeating a point taken up in previous TV Blogs, it is nevertheless worth repeating once in a while that TV's greatest asset is its ability to take people places they cannot go themselves.

For viewers, this has long been the medium's core value. TV's capability for doing this has improved over the decades with innovations in technology that have steadily made the capture and delivery of sounds and images from virtually anywhere faster, closer and more compelling.

The only obstacles are the costs of deployment, the potential dangers in the world's hot spots, and the gaining of access to areas normally walled off from the prying eyes of TV camera crews.

This subject arises today because of the premiere on Monday night (January 15) of an illuminating new docu-series on National Geographic about the United States military.

Called “Chain of Command,” this eight-part series comes billed as “an unprecedented collaboration with the Pentagon,” which apparently allowed a level of access to offices and personnel within the famed building that had not been permitted previously, at least according to NatGeo.

Whether the access granted for “Chain of Command” was unprecedented or not, this series is one of those that comes along every so often that commands your attention.

This documentary was filmed over an 18-month period in the Pentagon and all over the world where the Defense Department is directing military operations, including Iraq, Afghanistan and other places.

Among those interviewed are Gen. Joseph Dunford Jr., current chairman of the Joint Chiefs of Staff (photo above).

It is certainly true that in the interview segments and in some of the scenes in which the NatGeo cameras are present at meetings of Pentagon committees and staff, the subjects are conscious of the cameras and seem particularly careful about what they say.

Still, this level of access is better than no access at all. And the same goes for segments filmed in some of the world's military hot zones. TV news organizations have covered these places off and on for years.

But it is always valuable when a long-form docu-series like this one comes along to give greater depth and breadth to the subject matter.

The point of this documentary is to give viewers at home and around the world a better look at how this war is managed and waged. And some of its lessons won't really come as news to most people.

Certainly, most of us are already aware -- if we bother to ponder it -- that military hostilities are unpredictable and can run afoul of the best-laid plans.

In the places where the United States military has been waging a war on terror at least since 9/11/2001, the complexities are great indeed.

As the series points out, the war on terror involves fighting a dedicated enemy with no scruples, while also working in coalition with local stakeholders such as the armed forces of Afghanistan and Iraq and their citizens. It is not easy, to say the least. And, of course, it is dangerous, violent, dirty and deadly work.

If the goal of “Chain of Command” was to bring these points home, then mission accomplished.

military, tv
1 comment about "NatGeo's 'Chain Of Command': TV Takes You There".
Check to receive email when comments are posted.
Next story loading