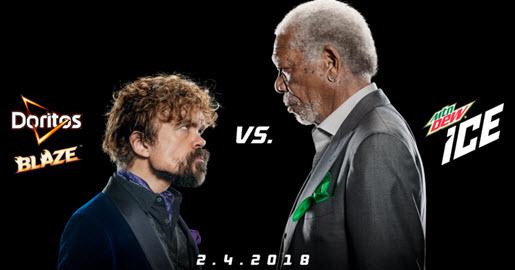 According to PepsiCo, this marks the first time that one company has advertised two of its trademark brands back-to-back in one nationally televised Super Bowl commercial.

Doritos took a year off from the Big Game last year, after ending its 10-year run of “Crash the Super Bowl” fan-generated ads. Mountain Dew’s last Super Bowl ad was 2016’s "Puppymonkeybaby” — a spot that was at or near the top in various performance rankings of the game’s ads, depending on the metrics used.

The combined Super Bowl ad “is a great example of the power of PepsiCo's food and beverage portfolio coming to life for consumers on one of the world's largest stages," said PepsiCo North America CEO Al Carey, in the announcement. "Doritos and Mtn Dew go perfectly together, and both brands have passionate fan bases.”

Blaze follows several other spicy Doritos varieties aimed at the adventurous taste buds of millennials (including Flamas, Spicy Nacho, Spicy Sweet Chili, Tapatio, Jacked Ranch Dipped Hot Wings, and Salsa Verde). But Blaze, sold in packaging featuring flames and thermal imaging handprints on the label, is distinguished by a “complex flavor” and “heat that builds as you crunch,” according to PepsiCo.

Lemon-lime flavored Ice is designed to reignite Mtn Dew’s sales growth by adding caffeine as a differentiator, thereby winning over millennials who currently choose Sprite or 7Up as a refreshing beverage.