My Dinner With Donald 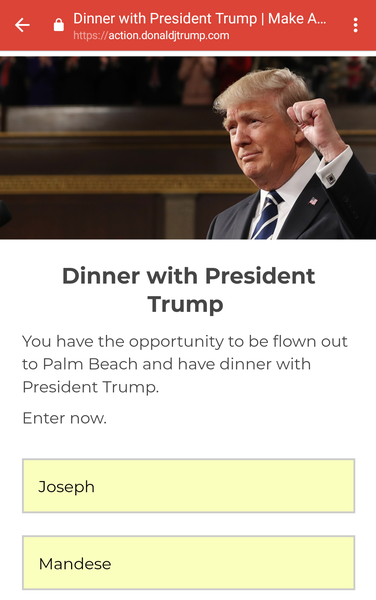 Well, that’s what I assumed would happen when I clicked on a link to enter a chance to “win dinner with President Trump at the best spot in Florida on the ANNIVERSARY of the people’s inauguration.”

The email, which came from victory.donaldtrump.com and had the official Trump/Pence logo on it, said if I win, they’ll take care of getting me and a friend to Palm Beach and “reserving your room…”

The email said the “approximate retail value” of the sweepstakes is $3,000, and that one winner would "receive round-trip transportation and accommodations and tickets to attend a dinner with President Trump at the January 20, 2018 Trump Victory Dinner in Florida."

It said I just need to “decide who to bring for this once-in-a-lifetime opportunity.”

So here’s the deal -- if I do win, I’ll post another Email Insider inviting readers to make the best case for being my guest.

Trump’s email, by the way, did not explain how the winner would be drawn, only that “no purchase, payment or contribution was necessary to win,” and that the odds of winning “depend on the number of eligible entries received.”

How did I get on the list for this once-in-a-lifetime opportunity? The only thing I can deduce is that I entered Trump’s “Fake News Awards” poll a couple of weeks ago, so I’m probably in their database now.