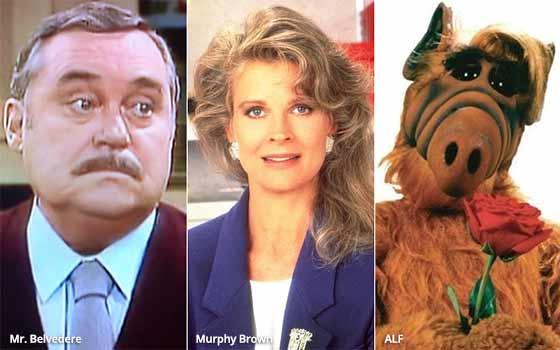 A new “Murphy Brown”? What … was Mr. Belvedere unavailable?

Sadly, that happens to be true. Mr. Belvedere is unavailable because the great actor who played him on “Mr. Belvedere” on ABC -- Christopher Hewitt (above photo, left) -- passed away in 2001.

It was a very different world then, and yet CBS intends to bring back a relic of that bygone age, “Murphy Brown,” with the intention of updating the show’s TV-news setting to reflect the current environment in news media and politics in the age of Trump and Twitter.

I can picture it now: The new “Murphy Brown’s” first episode will open with an exasperated Murphy (played once again by Candice Bergen, who will be 72 in May) talking on the phone with Donald Trump. Her end of the conversation will be heard, of course, but not his.

In an announcement Wednesday afternoon, CBS said it has ordered 13 episodes of the new “Murphy Brown” to air next season. Bergen will star, but no other cast members were announced.

“As its 30th anniversary approaches, 'Murphy Brown' returns to a world of cable news, social media, fake news and a very different political and cultural climate,” the press release said.

Plenty of stories that appeared on Wednesday and Thursday in the wake of this announcement positioned the show as another example of network TV's current mania for remaking old shows.

The philosophy seems to be based mainly, at least at first, on the familiarity of the shows’ titles. Sure, CBS could make a show with some other title about a swashbuckling, inventive adventurer, but why not just name the show “MacGyver” and be done with it?

The same goes for a cop show based in Hawaii (“Hawaii Five-O”) or a drama series about the L.A. Police Department’s Special Weapons and Tactics unit (“S.W.A.T.”). Yes, the last three aforementioned reuses of old show titles are all on CBS, the network that is about to bring you a new/old “Murphy Brown.”

On the other networks, ABC is bringing back “Roseanne” in March, and NBC brought back “Will & Grace” last September.

So what are we to make of it all? To give the networks their due, they’re only trying things they think will work for them. And whether a show’s title is new or old, a show sinks or swims based on its own merits.

In other words, you could make a new “Mr. Belvedere” anytime you want to, but whether or not people will form an attachment to it is the same question that comes with any show a TV network develops and produces: Who knows?

In general, however, remake mania is beginning to seem a little like re-tread mania -- as if the only ideas the old networks can come up with are old ones. They’re clinging to the past, you might say, reliving their glory days.

The trend would also seem to go against the efforts all networks say they are making to lower the median ages of their audiences. It is reasonable to wonder how that can be accomplished with a new “Murphy Brown” starring a Golden Girl.

On the other hand, in the real-life world of TV news, there are a number of women of a certain age who are highly respected and still going strong -- including Lesley Stahl, 76, and Jane Pauley, 67, at CBS, Andrea Mitchell at NBC (71) and Judy Woodruff on the PBS “NewsHour” (also 71). In many ways, these women are national treasures.

However, Murphy Brown is not a real person. And she hasn't been seen on TV since 1998 (the year “Murphy Brown” came to an end). Where has she been the last 20 years? Has she remained at work in some unseen parallel universe, or asleep like some news-media version of Rip Van Winkle?

And when she wakes up, who will have the nerve to break the news to her that Donald Trump is the president of the United States?