Trump State Of The Union Will Be Great TV 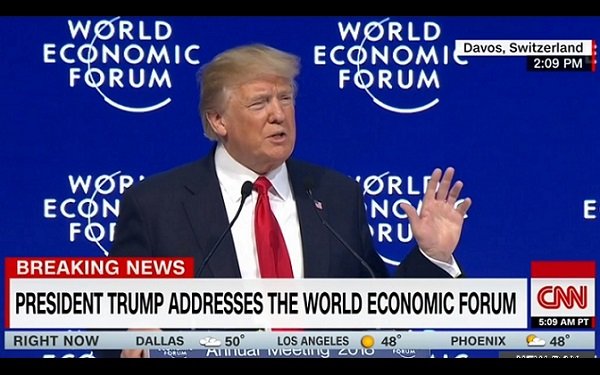 Here in the age of Twitter, the dumbing down of American discourse continues with various factions threatening symbolic protest actions during Tuesday night’s televised presidential State of the Union speech.

Scheduled to begin at 9 p.m. Eastern on the usual array of broadcast and cable-news networks, the speech will be Donald Trump’s first State of the Union address since taking office last January.

While there have been scattered expressions of anti-presidential acrimony at past State of the Union speeches, attendees at the speeches have generally maintained the tradition of refraining from overt and obnoxious protest actions.

But today, the culture is all about mounting demonstrations that “read” well on TV and also have the potential to resonate on social media.

Decorum -- inasmuch as “decorum” is still a thing today -- is out. Wearing protest garb, as if this annual presidential speech delivered to a joint session of the United States Congress is on par with a Hollywood awards show, is in.

Taking a cue from women who attended the Golden Globes earlier this month (and possibly other show business awards shows too), female Democratic members of Congress are reportedly planning to wear black to Trump's State of the Union speech to show their solidarity with the #MeToo movement. Hashtag: #Congresswomentoo?

And heaven help any Democratic congresswoman who wears some other color. A handful of attendees at the Golden Globes were sentenced to days of social-media derision for daring to be different.

They “refused to wear the ribbon,” you might say, recalling an infamous episode of “Seinfeld” in which Kramer was singled out for derision and embarrassment by “ribbon bullies” because he wouldn’t wear a ribbon during an AIDS walk. That episode dates back to 1995. It was ludicrous then, but today it is oh-so real.

Meanwhile, members of the Black Congressional Caucus are considering a number of demonstrative activities at the State of the Union address.

None of the reports mention the chief consideration, which is: Which of these will play best on TV, and then later as short-form clips on social media where they will be widely shared?

Not to be outdone, a group of celebrities was planning to get together last night in a theater in New York (Monday, January 29) to complain about Trump at an event billed as “The People’s State of the Union.”

This collective airing of grievances -- expected to draw such notables as Whoopi Goldberg, Mark Ruffalo and Alyssa Milano -- was to have included entertainment from singer Andra Day and rapper Common.

The event is “a better reflection of our state of the union based on a more populist point of view, based on the people's point of view,” Ruffalo reportedly said in an interview with People magazine.

This event was shrewdly scheduled for the night before Trump's speech because, like him or not, his first State of the Union speech will likely be a big draw -- bigger even than a gathering of celebrities in New York.

With the potential for camera-ready protests breaking out during the speech, this State of the Union could even surpass all others for ratings and attention.

I hate to break it to the protesters, but that is the kind of situation in which Trump shines. Millions will tune in to see how he deals with the hecklers in his midst. This State of the Union is shaping up to be great TV. It is not to be missed.

politics, social media, tv
4 comments about "Trump State Of The Union Will Be Great TV".
Check to receive email when comments are posted.
Read more comments >
Next story loading