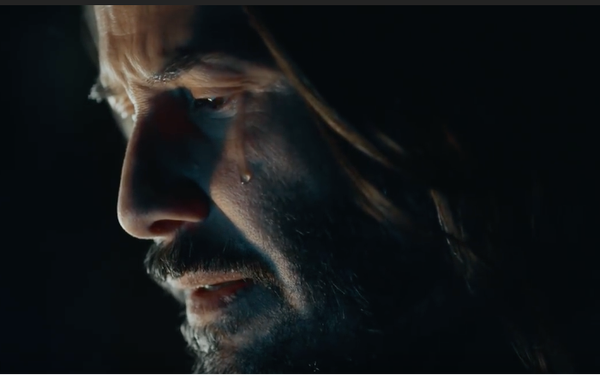 There's something about your fifth time.

Squarespace, a website-building tool for consumers and small businesses, is making its fifth appearance on the Super Bowl next Sunday, and maybe this time it can even make “Sad Keanu” happy.

In advance of the big game, the company has released a series of teaser ads featuring actor Keanu Reeves mulling the creation of a website for his Arch Motorcycle company. In one ad, Reeves talks to visions of himself in mirrors, an airstream trailer and the sky about whether he should start a motorcycle company (while traveling on a deserted highway on a motorcycle). The second depicts him creating a website at night in front of a solitary campfire (ending with him shedding a solitary tear at its simplicity and beauty).

The teaser ads are part of Squarespace’s effort to build buzz before the game, says Kinjil Mathur, the company’s chief marketing officer. “Being a part of the Super Bowl is no longer a one-day event: it is a culmination of the announcement, the game-day buzz, and the post-game opinions when viewers and critics vote on their favorite ads,” she tells Marketing Daily. “We’ve found success generating momentum to take us through all three of these moments by utilizing teasers and sharing our ad ahead of the game through various channels.”

The teasers will be running in both paid and organic channels prior to the Super Bowl, and serve to give viewers a “taste” of the in-game spot’s tone, Mathur says. “They also play a part in enhancing the motivational message at the core of this campaign: No one but you can make your dreams a reality. Make it happen,” she says.

As a fifth-time advertiser, Squarespace obviously sees some value in the Super Bowl, despite its expense and the noise throughout the day. Much of that value comes simply out of the game’s timing in the calendar. “At the beginning of the year, there is a natural urge for people to pursue their passions, start new adventures, and plan their next move,” Mathur says. “Timing-wise, the Super Bowl is a great opportunity for us; we can leverage the game to share Squarespace’s mission and build brand awareness with a broad, global audience.”