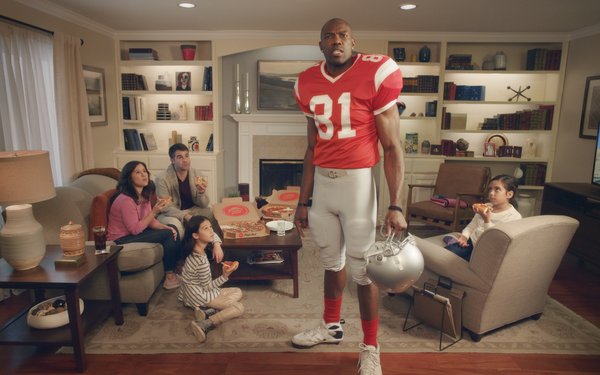 Last week, the pizza chain unveiled a video and social promotion, featuring retired NFL pro Devin Hester, driving consumers to join the loyalty program before the game’s kick-off. The incentive: Members will be eligible to win free pizza if Hester’s record for the quickest SB touchdown (14 seconds into a game) is broken during SB LII.

Today, Pizza Hut pre-released the Owens ad, which also promotes the chain’s claim that Hut Rewards is the “faster way to earn free pizza” because of how the rewards program is structured (unlimited points and a free two-topping medium pizza for 150 points).

The brand will also push the “faster free pizza” message through cutdowns and clips featuring Owens on Facebook, Twitter and Instagram, digital banner ads, and its site’s homepage.

The Super Bowl is the biggest day of the year for major national pizza brands, and pre-game—the hour before kick-off—is peak ordering time, according to Pizza Hut, which expects to sell more than 2 million pizzas during that window.

Pizza Hut generates more than half of its orders (year round) through digital channels, including apps, Pizzahut.com, Twitter and Facebook chatbots, and Amazon Echo.