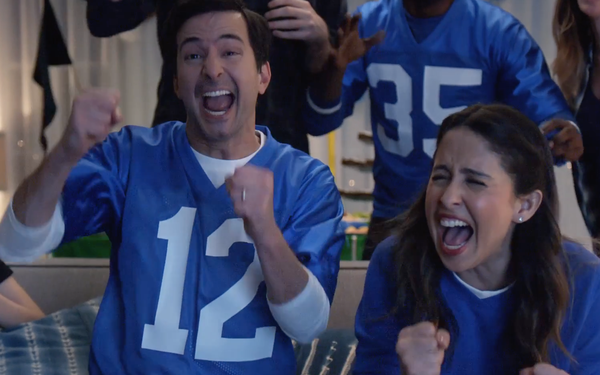 While the National Football League has taken more than its usual share of lumps, the National Retail Federation says fans are pulling out all the stops for this year’s Super Bowl, spending an estimated $15.3 billion. That represents a 9% gain from last year’s $14.1 billion, or about $81.17 per celebrant. Younger viewers are the most enthusiastic, with viewers in the 25-34 age group planning to spend an average of $118.43.

When the New England Patriots, the reigning champs, take the field against the energized Philadelphia Eagles, no one will go hungry: The NRF says that 76% of those it surveyed plan to watch, and 82% of them are buying food and beverages to celebrate. That’s up from 80% last year, a high for the game survey.

About 11% will buy team apparel or other accessories, unchanged from 2017, 8% will buy decorations and 8% plan to pick up a new TV.

The survey, conducted by Prosper Insights & Analytics was based on some 7,200 adults, was fielded before the final matchups were determined. It also finds that 18% plan to host a Super Bowl party, 28% plan to attend one, and 5% say they’ll watch from a bar or restaurant.

The annual event offers brands a relatively rare opportunity to shine, with 24% of those in the NRF poll saying they consider commercials the most important part of the game. (Some 41% cite the game itself, 15% just like to be with friends, 14% like the halftime show best and 7% are just in it for the food.)

But marketers are nervous. TV ratings for the NFL sank 10% in the regular season, and fell 13% for the Wild Card games. While last year’s Super Bowl, a nail biter between the Patriots and the Atlanta Falcons that was the first ever to go into overtime, drew 111.3 million viewers, that represented a decline from the previous year. Ratings slipped in 2016, too.

As a result, brands are looking for new ways to pique fans’ interest. More marketers are looking for ways to maximize mobile engagement, says Courtney McKlveen, head of U.S. field sales for Oath, Yahoo’s parent. “It’s a cultural event on a mass scale, and we’re looking for fun ways to get people to engage,” she tells Marketing Daily. With Pizza Hut, for example, Yahoo Sports is continuing last year’s "Squares Pick’em” game, and this year, added pizza prizes (up to a year’s worth of pizza.)

The idea, she says, is for brands to find ways to sell a product, create an authentic experience that matches both the game and the brand, and then add value. “Consumers don’t want to be distracted from the game. And Pizza Hut is trying to connect with that fandom.”