Sitcom Teacher Behaving Badly: So What Else Is New? 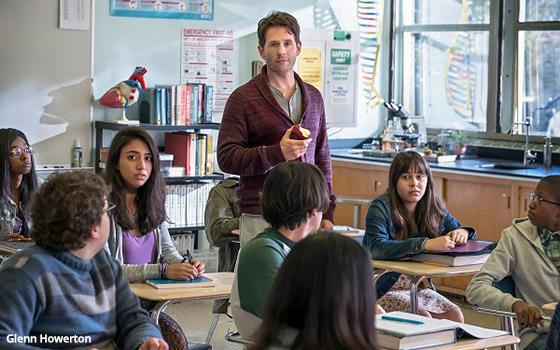 The premise of this new sitcom -- titled “AP Bio” -- is that the teacher of this biology class does not want to teach it.

For reasons I do not even remember, even after watching the first two episodes of this show just two days ago, he comes by this job in some reluctant way after failing to achieve tenure as a philosophy professor at Harvard.

It's not even clear how he came to be assigned to a biology class (specifically, advanced placement biology -- AP bio, for short -- in case you are like me and cannot make head or tails of this show's title). The man is a philosophy scholar (supposedly), not a biologist.

He is also a world-class jerk who drives recklessly, throws violent tantrums and treats everyone he meets with contempt and disdain.

As a teacher, he is so antisocial and blatantly disinterested in teaching that not even the decidedly loose plausibility requirements of a TV sitcom can justify this man holding onto this job for more than five minutes before being canned.

“AP Bio” comes to NBC from Seth Meyers and Lorne Michaels. The show stars Glenn Howerton (“It's Always Sunny in Philadelphia”) as the bad teacher and Patton Oswalt as the school principal who for reasons unknown will not fire this guy.

As TV comedies go, there are worse ones on the air these days than “AP Bio.” On the other hand, the show is the fourth sitcom (by my personal count) to come down the pike in the last few years featuring educators gone wild. And that's not even counting the 2011 Cameron Diaz movie “Bad Teacher.”

Of the three TV shows that have preceded “AP Bio” onto the air, two are still around and will each have their third seasons this year -- possibly at the same time that “AP Bio” is on the air (should it last so long).

These are TV Land's “Teachers” and TruTV's “Those Who Can’t.” The third bad-teacher sitcom was “Vice Principals,” the HBO comedy series starring Danny McBride that was probably the greatest vice-principal sitcom ever made. Unfortunately, it ended its run last November.

“AP Bio” is the kind of show that might be worth watching, but (and I cannot stress this enough) only if you have absolutely nothing else to do during the 30 minutes from 9:30 to 10 p.m. Eastern that this show is on -- no laundry, notes to self to write, phone calls to make, pets to feed, plants to water or just about anything else.

Then and only then can you be free to watch “AP Bio,” because under any other circumstance, the show is a complete waste of your time.

One more thing to note about “AP Bio”: After its premiere this week, it will then go away until March 1 after the winter Olympics, by which time “AP Bio” will already likely be forgotten.