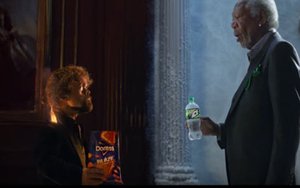 After releasing not just one, but two teaser videos, PepsiCo this morning unveiled the actual 60-second Doritos Blaze and Mtn Dew Ice ad that will air during the Super Bowl’s first half.

Actually, there are two 30-second videos from Goodby Silverstein & Partners, to run consecutively to create a lip-syncing “battle” of sorts between the celebrities representing each of the new products.

In the first segment, “Game of Thrones” star Peter Dinklage, representing the hot Doritos variety, lip-syncs, amid flames, to the super-fast-paced lyrics sung by Busta Rhymes’s in Chris Brown’s "Look at Me Now.” Rhymes, appearing as a live portrait on the wall, occasionally chimes in.

The second segment features veteran actor Morgan Freeman, representing Mtn Dew Ice, spreading frost as he lip-syncs to Missy Elliott's funky hit "Get Ur Freak On." Elliott backs him up, dressed as an ice queen.

Starting on Game Day, PepsiCo will offer an exclusive Snapchat lens that lets fans record their own performances, inspired by the ad. Fans will also be encouraged to pick a side and join the conversation on Twitter and Instagram by following @Doritos using #SpitFire and @MountainDew using #IceCold.