HGTV And The Barn Door-ization Of America 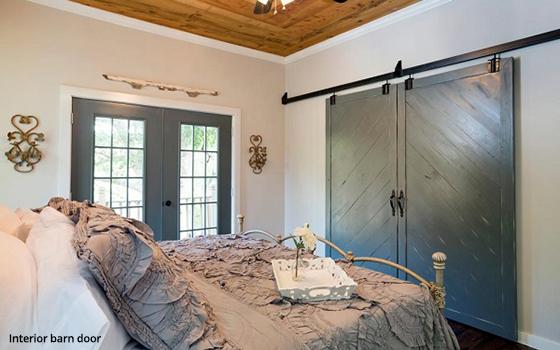 Any real estate agent who shows me a home with a barn door inside of it will be shown the door.

Similarly, any interior designer that proposes or depicts a barn door inside my house in a decorating plan will be dismissed.

It is a tribute perhaps to the influence of HGTV and its home-renovation shows that ugly barn doors inside of homes have now become acceptable.

They are omnipresent on the HGTV shows, and, as a result, homeowners on the shows who have had these barn doors hung in their homes act as if they love them. Maybe they actually do love them, but it is difficult to understand why.

As easy as it seems for these people to love them, it is just as easy for many of us to feel the opposite.

To many of us, these interior barn doors are unsightly, ungainly, disproportionate and hideous. The same goes for the bulky track system they are mounted on.

In our household -- which has no barn doors, but where HGTV is on for an hour, on average, almost every evening -- the sudden appearance of a barn door during the “reveal” segment on an HGTV show has the effect of ruining some otherwise sensible interior design makeovers.

In addition, we often wonder if the homeowners on these shows realize these doors don't really close all the way. That's one big reason, in addition to their overall ugliness, why we won't have one anywhere in the house, especially (but not limited to) the bathroom.

These interior barn doors (such as the massive, obtrusive specimen in the photo above) are just one feature of home décor today that seems to have swept the country thanks (or no thanks) to HGTV.

Another category is the one that encompasses various repurposed doohickeys and tchotchkes that the HGTV designers seem to love. To me, they are just dust collectors.

Whenever I see the interiors that have been freshly staged with all of these doodads for the big reveal on shows such as “Fixer Upper,” all I can think of is: Who is going to dust all of that stuff after Chip and Joanna Gaines are long gone?

And there's another thing about some of the stuff (is it OK to call it “junk”?) that Chip and Joanna Gaines and others on HGTV repurpose as wall art and shelf-fillers: Some people like to call old wagon wheels and used cabinets with chipped paint “shabby chic,” but to me, they just look shabby.

Not only that, but some of the choices are just downright strange. For example, in one promo that runs often on HGTV for “Fixer Upper,” Joanna is seen arranging three repurposed cellos as wall hangings. At least one of these forlorn instruments is broken -- with either all or most of the neck missing.

If I walked into my house and an interior designer had decided to surprise my wife and me with three broken cellos mounted on our living room wall, I would probably end up in court suing this person.

As noted in at least one previous TV Blog (and possibly more), HGTV has had a huge influence on home décor, renovations and the whole house-hunting and buying process. It's all a matter of taste, of course, and opinions will vary about all of the repurposed wagon wheels and cellos, and the faux barn doors being hung over America's bathroom entranceways.

Some people like them, but speaking as a city-dwelling apartment resident, barn doors are better left on barns and broken cellos ought to be repaired and played. But hey, that’s just me.

tv
2 comments about "HGTV And The Barn Door-ization Of America".
Check to receive email when comments are posted.
Read more comments >
Next story loading