Bacardi Sends 5,500 Employees 'Back To The Bar' 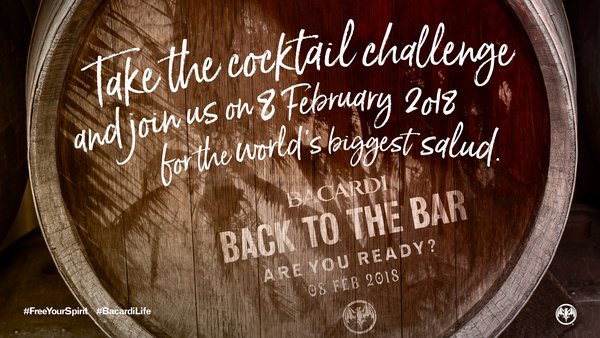 On February 8, Bacardi Limited will shut down normal operations and ask its 5,500 employees worldwide to go hang around in bars for a while.

Well, not just hang around, exactly.

The “Back to the Bar” campaign combines boots-on-the-ground consumer outreach with social media.

Employees are being asked to connect with patrons at local bars, encourage them to try cocktail recipes featuring Bacardi spirits brands, snap pictures of their toasts, and share those using #FreeYourSpirit and #BacardiLife.

A “Bacardi Spirit” heat map on the company’s social media channels will light up to show where employees in 40 countries — from all levels and types of jobs — are sharing their on-premise experiences.

Bacardi is designating bars in cities with Bacardi offices, but even there, employees have leeway to choose other bars, according to a company rep. Are they meant to head to bars during what would normally be a workday? “Employees are free to head to the bar at their leisure, but most will be going to the bar after work, when other customers in their cities are also heading to after-work drinks,” he says.

The family-owned company has a tradition of annually celebrating its founding by Facundo Bacardi in 1862. This is the first Back to the Bar campaign, but Barcardi plans to continue it each year on its Founder’s Day.

In particular, employees are being asked to encourage patrons to try the Bacardi Cuba Libre, created by the Facundo Bacardi himself. Other signature cocktail recipe options being promoted feature Martini Negroni, Grey Goose, Dewar’s, or Bombay Sapphire & Tonic.

The campaign is being supported by Bacardi Global Limited and partner agencies. In addition to the sampling benefits, the initiative — which will be promoted across the brands’ social accounts, including its @bacardilimited1862 Instagram channel — aims to support Bacardi Limited’s restaurant and bar partners (and bartenders) by driving traffic to their premises.

But the campaign’s goals go beyond sampling and buzz- and traffic-building.

Bacardi freely acknowledges that Back to the Bar was inspired by REI’s #OptOutside campaign, in which the company closed its stores during Black Friday and encouraged all staff and management to go experience the outdoors in a new way.

“Back to the Bar is our version of ‘walking the factory floor,’” said Mahesh Madhavan, CEO of Bacardi Limited. “It puts our people in touch with what’s happening in our business in real life and real time — something you can’t truly understand behind a computer screen, sitting through a presentation, or dissecting a spreadsheet.”

Perhaps most important, Back to the Bar, like Founder’s Day, is designed to “reignite employees’ entrepreneurial spirit” and reinforce its cultural tenant that everyone can be a “founder” by investing themselves and their ideas in the company, says the company.