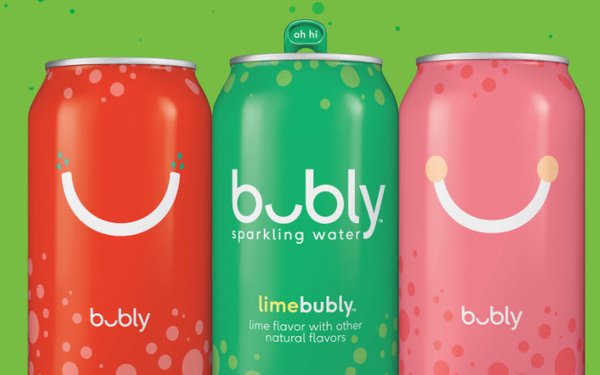 Specifically, young adults have latched on big-time to LaCroix, a 35-year-old brand acquired in the 1990’s by National Beverages. LaCroix’s sales leapt from $65 million to $226 million between 2010 and 2015, according to Euromonitor data cited by Business Insider — making it the top-selling flavored bottled water in the U.S.

LaCroix currently has a 19% share of the U.S. sparkling water category, to Perrier’s 11%, and accounted for half of the category’s dollar growth last year in IRI FDM+C channels, Susquehanna analyst Pablo Zuanic wrote in a note to clients last week.

The rapidly growing sparkling water category has reached $1.2 billion and could reach $220 million by the end of 2019, and PepsiCo could potentially realize $100 million in Bubly sales this year, according to a note by Credit Suisse analyst Laurent Grandet, pointed out Business Insider.

The marketing for Bubly (branded in all lower case, as bubly) stresses fun and sociability, employing the hashtag #CrackASmile  on social media.

The water comes in eight flavors that include its name (cherrybubly, mangobubly, etc.). Its brightly-colored packaging bears a smile motif #CrackASmile and greetings such as “yo” and “Hey u.”

PepsiCo is clearly prepared to invest in making a big splash. Introducing the brand with two ads during the Academy Award reflects PepsiCo’s commitment to making Bubly one of its biggest product launches to date, Todd Kaplan, vice president, Water Portfolio at PepsiCo North America Beverages, confirmed in the launch announcement.
Bubly — coming just a year after PepsiCo’s Lifewtr launch — also  speaks to PepsiCo’s commitment to putting the water category at the center of its diversification strategy.

1 comment about "PepsiCo To Bow Bubly Water With Dual Oscars Ads".
Check to receive email when comments are posted.
Next story loading