Random Thoughts On The Coverage Of Another Massacre 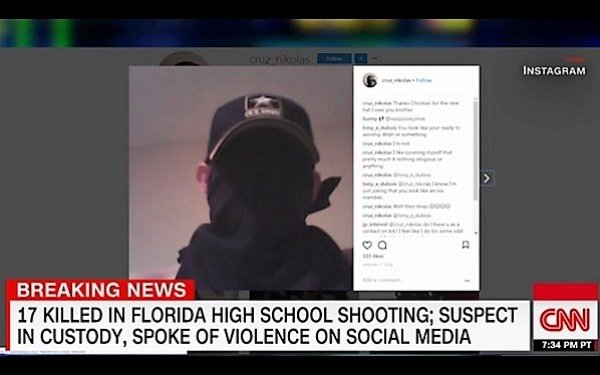 Media coverage of the deadly massacre in a Parkland, Florida high school this week seemed to arrive at one very sobering conclusion -- that people in authority were in a position to know about, or to at least investigate, the shooter and then possibly make determinations about his potential for violence.

Apparently, no one did that. And he ended up carrying out this massacre. More than once during the TV news coverage on Wednesday and Thursday in the aftermath of the shooting, teens (among others) were seen being interviewed who, in their teen kind of a way, expressed their view that everyone in school knew this guy was off somehow. So if the kids knew, why didn't their teachers and administrators?

Some people reported the shooter to authorities -- most notably the FBI and also, possibly, local law enforcement. These stories were all over the place after the shooting.

TV news networks and newscasts had the shooter's social-media pages frozen and displayed on screens in no time flat (such as the one in the screen grab above taken from CNN Thursday afternoon). In this regard, journalists always seem to have more on the ball than law enforcement.

You ask yourself: If these things were so easy for desk assistants at CNN to find, why couldn't the FBI? Answer: Because the FBI probably didn't bother looking.

At times like these, journalists in all serious news media -- TV, newspapers, Web sites -- work hard getting all the information they can about individuals involved in these incidents and get it on TV very quickly.

Maybe the lesson here is that if you suspect that a classmate or next-door neighbor is unhinged, don't call law enforcement -- call a TV station or a network and ask to be connected to the newsroom.

Another striking feature of some of the coverage of this massacre was the nature of at least some of the interviews seen over the last few days with teens and at least one teacher who were in the school when the shooting occurred.

The thing that struck me most was the ease with which some of these people -- both grownups and teens -- were able to speak so matter-of-factly about this experience that they had just had hours earlier in which 17 people they knew had been shot to death in close proximity to them.

If my high school had been shot up like that while I was a student there, I suspect I would be in a state of shock bordering on catatonia for at least a few days, if not longer. But these people interviewed on TV seemed to have none of these symptoms.

Moreover, some were even smiling as if they were describing nothing more important than a football game or a movie they just saw.

This is not to be critical of them, since I have no idea what they are going through. Perhaps there is a phenomenon of delayed reaction to events like this that had not yet hit them.

However, I wondered if we now live in such a media-saturated, media-savvy society that ordinary people now know instinctually how to comport themselves on camera. Among other things, they seem to have learned how to “report” on terrible events they witnessed or experienced without emotion.

Of course, these few people seen on TV are probably atypical. For each of them who were on TV, there were probably many more people who would not have been capable of taking a reporter's questions about what they just went through.

As for the journalists themselves, particularly the ones who get tapped by the assignment desk to fly down to the location of the latest U.S. massacre, working as a reporter on what is commonly known as the national desk is now more like war reporting.

Nobody really talks about it, but PTSD is something journalists and their superiors should be looking out for.

news, tv
7 comments about "Random Thoughts On The Coverage Of Another Massacre".
Check to receive email when comments are posted.
Read more comments >
Next story loading