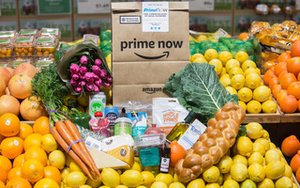 With Amazon’s recent expansion of Prime Now, a service that can get grocery orders into shoppers’s hands in two hours or less, food retailers are looking for ways to fend off the e-commerce giant with their own digital efforts, according to a new report from the Food Marketing Institute and Nielsen.

Amazon, which has been experimenting with many ways to use its acquisition of Whole Foods Market to shake up consumers’s grocery habits, last week announced free two-hour delivery to its Prime customers in Austin, Cincinnati, Dallas and Virginia Beach, with plans to roll it out in the U.S. People can order produce, bakery, dairy, seafood and meat, as well as staples. (And if two hours is too long to wait, they can pay an extra $8 to have their order in 60 minutes or less.)

The news is an immediate threat to Instacart, of course, which responded by announcing another wave of financing, adding $200 million, reports Bloomberg. The delivery service, which has agreements with retailers like Target and Costco, signed a five-year deal with Amazon back in 2016, and now finds itself competing with Amazon couriers.

Yet, while Amazon’s online food efforts are accelerating, the physical shopping experience in Whole Foods stores seems to be drifting along.

In its latest weekly shopping report, Barclays notes that “in general, it has become clear to us that while Amazon has lowered prices on select items at Whole Foods and signage has meaningfully increased (as well as a few select merchandising experiments) — little has really changed at Whole Foods (except possibly weaker execution given all the out-of-stocks),” writes analyst Karen Short. “Until execution issues are resolved and broader price cuts are implemented, we believe traction on sales will stall, so for now the pressure on the industry has abated.”

But the FMI/Nielsen report shows that other grocery chains, already light years behind Amazon, need to step up their digital game ASAP. It says America is hurtling toward online grocery shopping twice as fast as its experts previously thought: Where forecasts once said the majority of people would buy groceries online in 10 years’s time, the FMI now believes 70% of the U.S. will be buying groceries online within five years, amounting to about $100 billion annually. (That translates to an average online grocery spend of $850 per every U.S. family, perhaps as soon as 2022.)

In order for online food and beverage to succeed, it’s making six recommendations to keep up with this dramatically accelerated pace of change. These include improving marketing and promotional strategies; optimizing shopper insights; aligning organizational structures for omnichannel success; addressing discrepancies in datasets, and integrating forecasts for operation efficiencies.