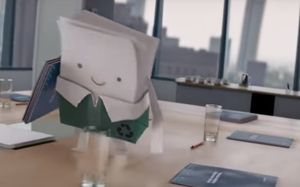 “The first campaign took a storytelling approach and was well-received, but testing revealed that viewers did not necessarily see the importance of paper products," says Mary Anne Hansan, president, Paper and Packaging Board.

Developed with agency Cramer-Krasselt, each animated character is designated to embody core values about consumer's use of and choice of paper or packaging. They are presented in photo-realistic scenarios, such as in a library, an orchard, on a graduation stage, and next to an award show podium.

The creative illustrates this concept portraying how paper in a boardroom helps to execute a flawless meeting as well as help transport goods from warehouse to your doorstep.

In addition to the TV and digital spots running via Hulu, the campaign will appear in magazines such as US Weekly, Forbes, Delta Sky, ESPN, HGTV Magazine and Parents Magazine, doubling the number of print titles for this year.

There will also be a billboard in Times Square announcing the characters as well as heavy social media support.

"The campaign is targeting the same audience, but the addition of the characters aims to create an instantly recognizable connection with the industry and help consumers recall of the campaign," says Hansan.