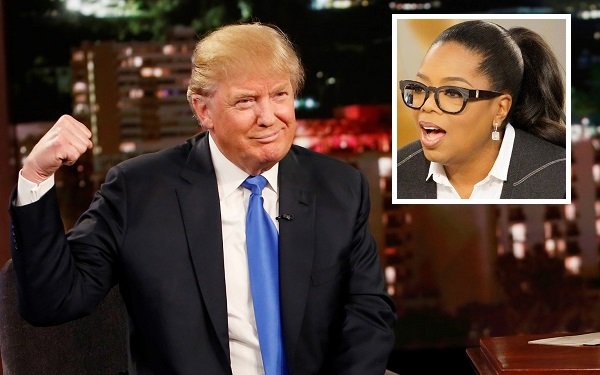 Oprah Winfrey had achieved just about everything in the TV business, but this week she suddenly gained another pinnacle: She joined the club of TV personalities and non-TV celebrities who have been attacked by Donald Trump.

It is an ever-lengthening list going back almost 20 years. By the TV Blog's reckoning, the list includes Arnold Schwarzenegger (because the ratings for “The Apprentice” didn't hold up when Schwarzenegger took over the show), and Barbara Walters and Rosie O’Donnell (both stemming from “The View”).

Just about every late-night host has been targeted by Trump, primarily via Twitter. Over the years, Trump has lashed out at: Bill Maher, after Maher said Trump looked like an orangutan; Seth Meyers, because Meyers hosted the White House Correspondents dinner on the night when then-President Obama roasted Trump; Jay Leno, because Leno allowed Maher to talk at length about Trump's resemblance to an orangutan on “The Tonight Show” (Trump's tweet then: “Jay sucks!”); and David Letterman, for reasons unknown but probably owing to Letterman's monologue attacks on Trump, among other things.

There was also a dust-up with Jerry Seinfeld that had something to do with Seinfeld withdrawing from a charity event being put on by the Trump family. Trump also went after Robert De Niro in 2011 after De Niro criticized Trump for Trump's obsession with Barack Obama's birth origins.

This week, the president went after Oprah following a segment on “60 Minutes” that she anchored on CBS Sunday night.

In the segment, Winfrey -- in her current role as a “60 Minutes” correspondent -- was seen leading a roundtable discussion about the Trump administration with 14 residents of Grand Rapids, Michigan, seven of whom voted for Trump and seven who did not.

The group had previously convened to talk about Trump on a previous “60 Minutes,” and the show sought to find out whether any of their views had changed after Trump’s first full year in office.

The conversation seemed to proceed with a great deal of balance, with both sides -- for and against Trump -- getting ample airtime. Indeed, one of the reasons “60 Minutes” went back to this group is that after they had first appeared on the show, the group kept in touch and formed friendships with each other, regardless of their political differences.

For some reason, Trump -- otherwise known as the "'60 Minutes' Viewer in Chief" -- objected to this segment and to Oprah herself. Sure enough, his “review” of the segment was encapsulated in a presidential tweet.

“Just watched a very insecure Oprah Winfrey, who at one point I knew very well, interview a panel of people on 60 Minutes,” tweeted the leader of the free world. “The questions were biased and slanted, the facts incorrect. Hope Oprah runs so she can be exposed and defeated just like all of the others!”

Of all the Trumpian tropes that connoisseurs of the president's tweets know and love (or hate), it is his liberal use of exclamation points that I tend to notice most. The president is nothing if not adamant about each and every opinion he expresses on Twitter. The exclamation points leave no doubt: He means what he says!

The other thing that we continually notice is the way he loves to associate himself with celebrities. He’s a name-dropper -- a man who measures at least part of his “success” in life by the celebrities he has met.

They all seem to have equal weight too. They could be Hulk Hogan, Oprah Winfrey, Bill Clinton or Vladimir Putin, but they are all the same to President Trump, who does not discriminate when it comes to famous people. If he has rubbed elbows with them, they are important, and so is he.

The hope Trump expressed in his tweet about Oprah challenging him in the 2020 presidential race is not likely to be realized. In the wake of the mini-boom in support of Oprah’s candidacy that erupted following her well-received speech at the Golden Globe Awards last month, Oprah has said she won't run.

Here is a suggestion for an upcoming “60 Minutes” segment, however: Oprah should convene a roundtable discussion of fellow celebrities who have all been attacked by Trump to talk about the experience. And if an orangutan can be persuaded to participate, then that's even better.