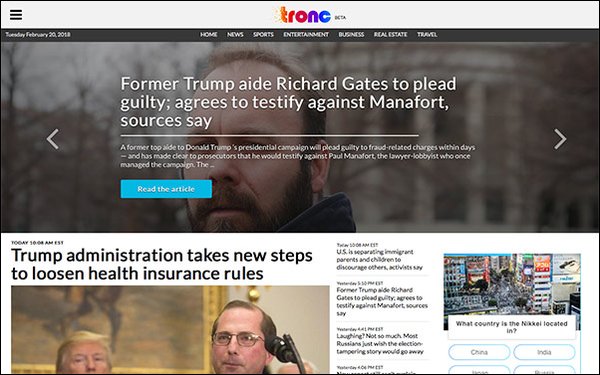 Tronc is moving some production and design jobs to its headquarters in Chicago to cut costs and centralize its business.

Tronc, the owner of publications like New York Daily News and Chicago Tribune, is moving about two dozen jobs to Chicago, according to multiple media outlets.

Tim Knight, Tronc’s newly appointed president, said in a memo obtained by the New York Post: “Like other leading news organizations that have taken bold steps to hasten their digital transformation, we will create a new central business unit headquartered in Chicago, called the Design and Production Studio, or DPS.”

The Design and Production Studio will be led by Cristi Kempf, associate managing editor for editing and presentation at the Tribune, and report to associate editor Colin McMahon.

“The DPS will perform editorial production of the print newspapers for each of our markets,” Knight added.

Knight said the move is part of a companywide reorganization “to reimagine how our newsrooms deliver on our journalistic mission and accelerate our transformation to a truly digital-focused company.”

On February 8, Tronc announced it was “embarking on a national digital growth strategy,” with a newly reorganized division called Tribune Interactive, home to Tronc’s digital assets and functions. That includes everything from product development to digital subscriptions and national digital sales.

TI will be led by Ross Levinsohn, the former CEO and publisher of the Los Angeles Times, who is returning from unpaid leave. Tronc launched an investigation into Levinsohn's behavior after an NPR report revealed he had been involved in two sexual harassment lawsuits at previous companies.

Tronc expects to close its sale of the Los Angeles Times and the San Diego Union-Tribune to billionaire Dr. Patrick Soon-Shiong for $500 million in April, which will also give the company some additional revenue.

Knight told staffers local newsrooms will review salaries for all editorial employees and may give raises.

“Over the next six weeks, while positions are being determined in line with our plan, we expect each local newsroom to review base compensation; where appropriate, each newsroom will make pay increases reflecting either change in responsibility and/or adjusting to market,” he wrote.

The move is likely an effort to stave off any unionizing efforts; the Los Angeles Times voted to unionize last month.
chicago, digital, newspapers
Next story loading