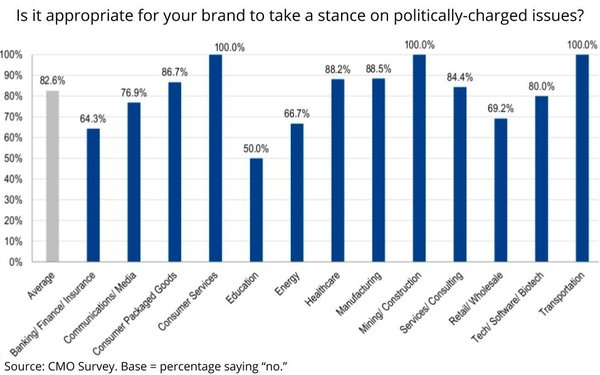 A year into the most politically- and brand-charged period in American history, a new poll of CMOs finds most of them believe they should keep their distance from politically-charged issues.

Eighty-three percent of 178 executives responding to the just-released February 2018 edition of The CMO Survey answered “no” to the question, “Do you believe it is appropriate for your brand to take a stance on politically charged issues.”

The findings of the survey, conducted by Duke University's Fuqua School of Business, are even more pronounced than those of other studies, including one conducted in early 2017 by Advertiser Perceptions for MediaPost,.

But averages can be misleading, because the study shows that marketers in different categories have more or less elasticity when it comes to associating their brands with political issues.

Not surprisingly, brands in categories involving a fair amount of policy of issues oriented marketing, were more prone to find it acceptable, including Education, Banking/Financial, Energy, and Retail/Wholesale. On that last point, retail brands have been especially visible and vocal in public debates surrounding the Trump Administration, including Nordstrom, Patagonia, etc.